A Leap into the Future: Assistant Professor Michael Garton on the promise of synthetic biology

A Leap into the Future: Assistant Professor Michael Garton on the promise of synthetic biology 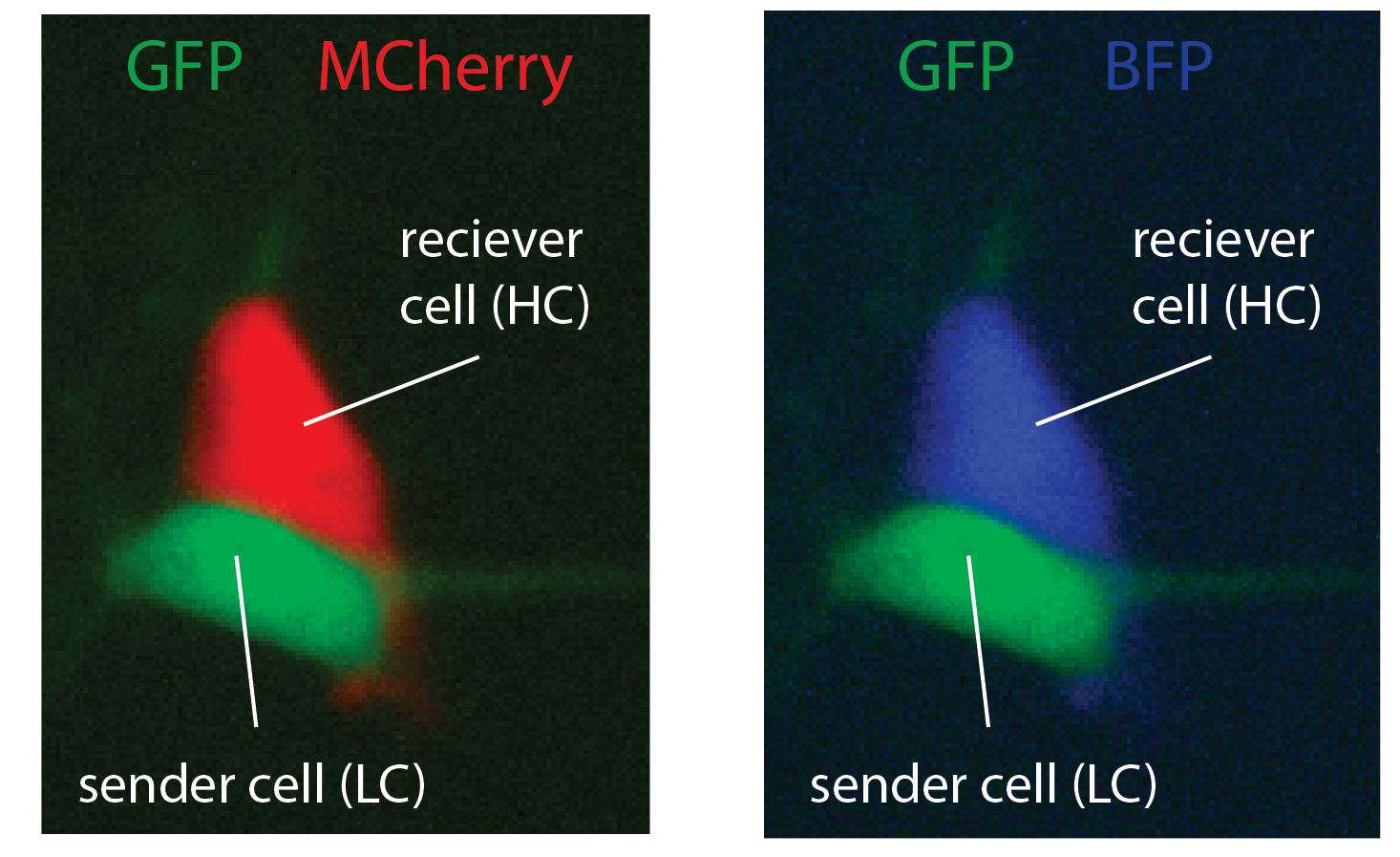 An example of synthetic biology in action: These human cells from the Garton lab are engineered to turn from red to blue when they detect molecules associated with inflammatory disease. In the future, human cells could be engineered to deliver therapeutics when they detect inflammation, meaning a person with a disease like arthritis may never even know they have it. (Image provided by Michael Garton.)

The Leap into the Future series looks at emerging areas or aspects of regenerative medicine. In this article, Paul Fraumeni talks with Michael Garton, assistant professor at the University of Toronto’s (U of T’s) Institute of Biomedical Engineering, about how his lab integrates synthetic biology and regenerative medicine, working toward the goal of creating cells that are better than nature.

Michael Garton got his start as a scientist without knowing it – when he was a little kid growing up outside of Nottingham, England, he would take things apart and put them back together again. Today, he’s continuing that re-assembly of things, only with cells.

Since joining U of T in 2018 as assistant professor at the Institute of Biomedical Engineering, his work has focused on designing new biological parts for human cells, such as proteins and genes. The idea is that the Garton lab will design living cells with the ability to treat health conditions – such an inserting gene circuitry that will detect arthritis and deliver a drug to stop the disease. Now, with an award of almost $1 million from Medicine by Design, he is one of four scientists leading projects in the Grand Questions Program. His project is entitled, “Establishing a ‘Centre for the Design of Novel Human Tissues’ to address graft cell death and promote ‘super-tissue’ development.” 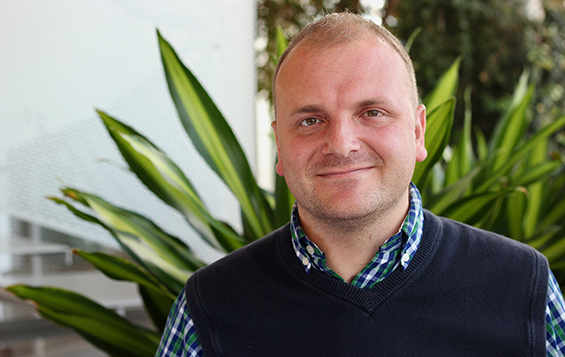 Q. Your work in the Grand Questions project fuses regenerative medicine with synthetic biology. You are, in fact, the Canada Research Chair in Synthetic Biology. What is this branch of biology about?

I would imagine many people outside of science aren’t familiar with synthetic biology. It’s been around for a long time, although synthetic biology and regenerative medicine have not been connected much in the past. Nowadays, synthetic biology is a very cross-disciplinary area and all aspects of biology are integrated with it. It’s used in a variety of areas, from agriculture to the perfume industry and environmental cleanup. And at its core, it means creating new biological parts that can be assembled into multi-part systems and then put together in order to create some new function in a cell.

Q. That’s a good segue into the work you’re launching through the Grand Questions program. What are you setting out to achieve?

The goal of the Grand Questions program is to ask “Where do we want to see regenerative medicine in 20 years?” We’re tasked with creating near-term goals that will then lead to broader, longer-term goals. For my group, we want to see if we can create human tissues that can tolerate ischemia, which is a lack of blood and so lack of oxygen supply and nutrient supply.

Q. Tell us more about ischemia.

It’s when blood flow and oxygen are restricted in a certain part of the body, such as the heart. It’s a big problem for scientists who work with stem cells. If they generate tissues with the stem cells and then transplant that tissue into a living being, for the first short while, the tissue isn’t integrated with the host network of blood vessels, which we call the vasculature. So, the transplanted tissue isn’t getting any blood — and therefore oxygen — and it won’t survive. Up to 90 per cent of transplanted tissues die because of ischemia. 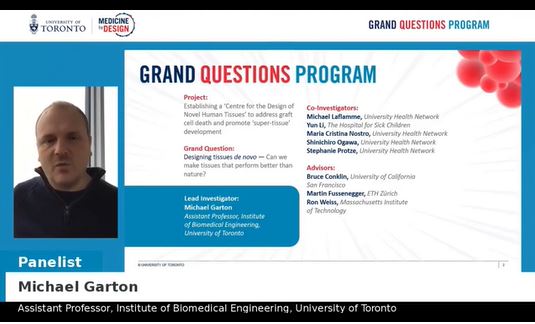 Michael Garton speaks at the Grand Questions Program launch event in May 2021.

Q. Is this where the notion of engineering tissues and cells that are “better than nature” comes into play?

We have a two-tiered approach. The first part is using synthetic biology to add additional functionality into the tissues that would allow it to translate to solving this problem of ischemia. So, for example, the ability to survive without oxygen for a prolonged period of time is something that tissues don’t normally do, and so that would make the cells we design, in a sense, better than nature. Nature hasn’t been faced with this challenge before — people haven’t tried to grow tissues in a dish and transplant them into a human subject. And so, since we want to do that, there’s this challenge of how we overcome the problem nature has presented us with.

Q. And what’s the second approach?

Our goal is to look at ways in which we can overcome the challenges of regenerative medicine, but then go a step further to make tissues that are augmented and adapted to the modern world. If we’re going to try and augment tissues to overcome challenges, why not add functions that make tissues behave in a way that gives more therapeutic benefit? For example, could we have cells that produce a biologic drug in response to sensing the upswing of a disease or a disease symptom, such as arthritis? Or to take it to another level, because the Grand Questions look way into the future, let’s talk about talk about interplanetary space travel. This may seem pie-in-the-sky now, but there may well be a time when astronauts can travel between planets. And one of the challenges is that astronauts are going to be exposed to high energy radiation for long periods. So, we could potentially design something that augments the DNA damage response such that the astronauts would be able to better survive that kind of travel.

Q . You’ve referred to this research as ‘high risk.’ What do you mean by that? Is it dangerous?

It’s not high-risk in terms of danger, but in investing time and effort into it when we don’t know if we can achieve what we want. Synthetic biology has been around for a long time and there’s a huge array of different tools and components that have been constructed, but it’s never really, to any meaningful extent, been deployed in human cells that come from stem cells. And so, there are a number of challenges, some of which we are aware of and some of which we’re probably going to find out.

Something called immunogenicity. That’s one for sure. After transplanting cells, the immune system senses something new in the body and attacks it. There are various things that we are working hard to try and minimize, but it’s high risk in that we don’t know for sure that we will be able to overcome all of the various challenges.

Q. You’ve assembled a talented team. Can you tell me about your team members? Why is collaboration so important?

A team approach is the only way to tackle complex problems. I come from a protein design and synthetic biology background, but I don’t have expertise in stem cell biology. I’m working with people who are on the front lines of regenerative medicine disciplines (editor’s note – see a full list of Garton’s Grand Questions team members). They understand exactly what the challenges are to bringing these regenerative medicine technologies to clinic and can lay out the problems that we need to solve clearly.

Once we get into actually developing solutions, we work together every step of the way. Because they have expertise in the different cell types, they’ll be able to immediately recognize what the emerging challenges are as well as we go along. It’s important that we have this team of people who can test and be constantly evaluating the challenges that arise, and then feed that back to us to try and alter the way that we do things to address some of those challenges.

Q. In fact, you’re developing a special hub around this collaboration, aren’t you?

Yes, we have an amazing team of Toronto-based investigators and clinicians as well as international collaborators and advisors. We’re going into this with a holistic, integrated strategy, which will be grounded by our establishment of the Centre for the Design of Novel Human Tissues. I think this will place Canada front-and-centre as a global leader in this area.

Q. You’re looking into the dark and you don’t know if you’ll reach your goals. How do you stay motivated? How do you not get frustrated?

Good question. With this project, we do have short-, medium- and long-term goals, so some of these things will be realized sooner than 20 years down the road. But, realistically, with anything in this arena it’s going to be a long time until you see it translated to clinic. There’s no guarantee that anything is going to work. You can’t have that as your sole motive. You’ve just got to be really interested in the actual science and that’s what keeps you motivated every day. You’re learning a lot. When you do find something new or get a good result, it’s a great feeling. I’ve put the team together over the last couple of years with people who are all motivated and smart. It’s a real pleasure to work with them every day.

Q. Still, this is painstaking work. Don’t you get intimidated by that?

Well, first let me say how important it is that we have support from Medicine by Design for this work. I’m hugely grateful not only for the funding, but for Medicine by Design giving us the freedom to pursue out-of-the-box research. I feel that it’s academia’s responsibility to do high risk research. And, thankfully, we have the freedom to experiment without fear of losing our jobs. If someone in a company tries something that’s going to take years and is very high risk, they’ll probably lose their job if it doesn’t work, or the company will fold if it’s a small start-up. So, in the academic medicine world, it’s our responsibility to be pushing the boundaries and going outside of the safe stuff.

Yun Lee: Scientist, Development and Stem Cell Biology Program, The Hospital for Sick Children; Assistant Professor, Department of Molecular Genetics, U of T. Specialty: understanding how the human brain forms, what makes it unique from that of other species, and how disorders like autism impact its development and function.

Martin Fussenegger: Professor, Biotechnology and Bioengineering, Department of Biosystems Science and Engineering of the ETH Zurich in Basel and at the University of Basel