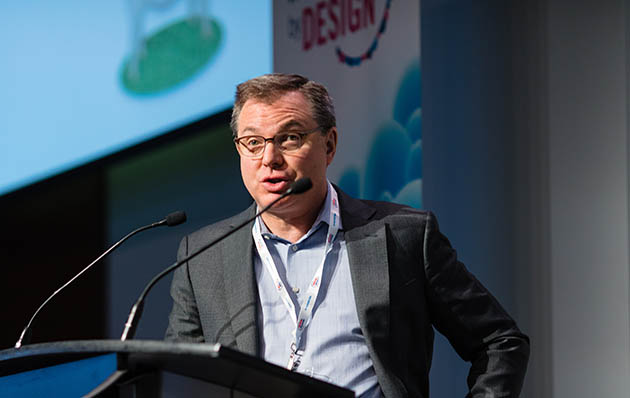 Michael Laflamme, clinician-scientist at the McEwen Stem Cell Institute at University Health Network, leads a team of researchers who are close to clinical trials for a cardiac disease treatment that uses stem cells to turn diseased heart tissue back into muscle.

As a cardiac pathologist, Dr. Michael Laflamme has seen his share of damaged and scarred hearts.

In the best case, the diseased organs he studies come from people who have already received heart transplants and are on the road to recovery. But far too often, they belong to heart failure patients who have died waiting for donor organs.

That’s why Laflamme, a clinician-scientist at the McEwen Stem Cell Institute at University Health Network (UHN), has made it his life’s work to develop a new treatment for heart failure that uses stem cells to reverse damage caused by heart attacks, with the goal of restoring normal heart muscle function. Thanks in part to funding from Medicine by Design, Laflamme and a multidisciplinary team of experts at the University of Toronto (U of T) and its affiliated hospitals believe they are only a few years away from bringing this therapy to patients who desperately need it.

“Right now, the only way we can replace the muscle is to give the person a new heart, but there are not enough hearts to go around,” says Laflamme. “This therapy could be an entirely new treatment option for people with end-stage heart failure.”

Laflamme is leading one of 12 teams from U of T and its affiliated hospitals that are sharing a total of $21 million in funding from Medicine by Design over three years. Funded by a $114-million grant from the Canada First Research Excellence Fund, Medicine by Design is a strategic research initiative that is working at the convergence of engineering, medicine and science to catalyze transformative discoveries in regenerative medicine and accelerate them toward clinical impact.

Cardiac research first captured Laflamme’s interest as a PhD student when he was visiting labs to find one that aligned with his interests. That’s when he first saw heart cells contracting in a dish.

“Lots of other cell types are doing important things, but heart muscles cells contract, and you could see the cell doing something visually,” he says. “There’s the immediate reward — if you make a heart muscle cell from a stem cell, you get plates of beating cells. I still don’t get tired of seeing that. That captured my imagination from the get-go.”

Laflamme went into cardiac research, and then stem cell research. He says he was fascinated by the fact that he could make heart muscle cells from human stem cells, as opposed to getting them from an animal. Stem cells are cells that have the potential to turn into any other type of cell in the human body.

“When you see a damaged heart, it’s pretty easy to understand how a strategy of trying to regenerate a heart by turning the scar tissue back into muscle makes intuitive sense,” Laflamme says.  “This is a completely new paradigm and it’s ambitious. But we’ve gone from model to model in logical sequence, and we know what the remaining challenges are.”

The stem cell product being developed in the Laflamme lab is not far from the clinic, says Laflamme. He gives an approximately three-year timeline for the product to be ready for clinical trials, and he says the goal of the Medicine by Design project funding is to keep improving it as it makes its way to through the pipeline to the clinic.

One of the ways Laflamme’s team is trying to improve the cells is by reducing the risk of arrhythmia, or abnormal heart rhythm. He says he’s optimistic that they will solve this issue, with the team having already identified interventions and ways to tweak the cells themselves, “We’re trying different combinations of cells and ways of engineering the cells to end up with a product with a better safety profile, and better electrical function,” says Laflamme.

While creating a new therapy is a near-term goal, Laflamme says there’s a longer-term, exploratory goal his team is also working on.

“In the past, this research has focused on adults after heart attack. But now we’re collaborating with clinical scientists at The Hospital for Sick Children. We’re wondering if the same cell product can be used on children with congenital heart disease,” Laflamme says. The research focuses on children who have a congenital birth defect called hypoplastic left heart syndrome, which causes the left side of the heart to form improperly. The syndrome currently has poor survival rates.

Keller and Laflamme have a successful history of collaboration. In 2016, they commercialized their stem cell production process through BlueRock Therapeutics , a company that was launched with the support of Bayer AG, a biopharmaceutical company, and Versant Ventures, a venture capital firm. BlueRock Therapeutics, which now employs more than 80 people in Toronto alone, received $225 million USD of financing, representing one of the largest-ever series A financings for a biotechnology company. In 2019, BlueRock Therapeutics reached a milestone in its success when it was acquired by Bayer AG.

Continuing these partnerships, Laflamme says, is important to keep the momentum going in Canadian scientific innovation.

“Canada punches way above its weight in terms of stem cell biology and regenerative medicine. It’s where stem cells were discovered. But I would like to see us be a continued player in the regenerative medicine industry. It would be great if these new discoveries were spawning new businesses here, and not just in places like the [San Francisco] Bay Area and Boston.”

Laflamme credits Medicine by Design funding for encouraging entrepreneurial thinking and bringing such varied teams of experts together.

“These are challenging experiments. We’re way past the experiments you can do in the petri dish. Medicine by Design supports big team-based science, and that lets us pool resources across multiple labs,” he says. “Medicine by Design allows us to take higher-risk, higher-reward approaches, in teams that haven’t previously collaborated.”