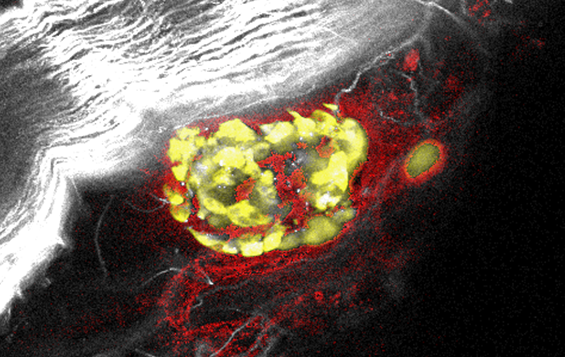 New Medicine by Design-funded research out of the lab of Michael Sefton continues to advance one of his lab’s goals: developing a cell-based treatment for type 1 diabetes that can be implanted under the skin and would eliminate the need for insulin injections.

“Type 1 diabetes is an autoimmune disease. The immune system mistakenly attacks pancreatic cells that secrete insulin, a hormone that’s needed to control blood sugar,” says Sefton, a University Professor at the University of Toronto (U of T) in the Department of Chemical Engineering & Applied Chemistry and the Institute of Biomedical Engineering, and Medicine by Design’s executive director. “To give the person with type 1 diabetes the cells back somehow is a logical treatment – but there are many hurdles to overcome before we can do so. This research is another step forward to this promising regenerative medicine therapy.” 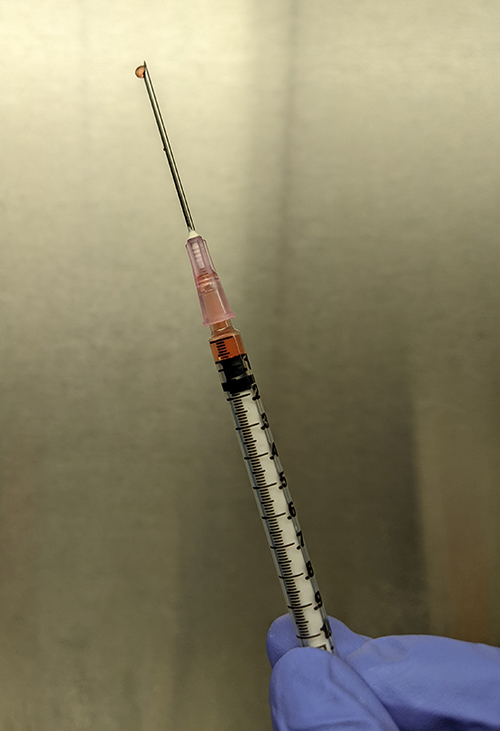 The hydrogel, which is injected under the skin in a simple process using a regular needle. (Photo by Sean Kinney).

The latest finding, published in the February issue of Biomaterials, showed that cells implanted under the skin of host animals with diabetes allowed connections to the blood vessels and were able to regulate blood sugar. The researchers confirmed that the treatment allowed insulin-secreting cells to survive in the animals.

“This research showed us again that our method of transplanting pancreatic cells under the skin has a lot of promise as a future diabetes therapy,” says Sefton, whose lab is located at the Donnelly Centre for Cellular and Biomolecular Research. “And that continuing to refine our methods is the key to this becoming a viable treatment for people living with type 1 diabetes.”

The Sefton lab has long investigated the possibility of using biomaterials under the skin as the delivery method for the pancreatic cells. This is because the skin is less hostile than other organs, which tend to launch a stronger immune attack against transplants. Also, Sefton’s lab has established in previous research that the addition of a component called methacrylic acid (MAA) aids with creating blood vessels that are needed for cells to survive and integrate into the host’s body.

Sean Kinney, a PhD Candidate in the Sefton lab and lead author on the paper, says this work builds on previous publications out of the Sefton lab, which have shown that MAA biomaterials are effective. This study refined the materials used in the transplantation by testing different types of injectable hydrogels and controls and focused more closely on the ability of the transplants to reverse diabetes.

About Medicine by Design and regenerative medicine