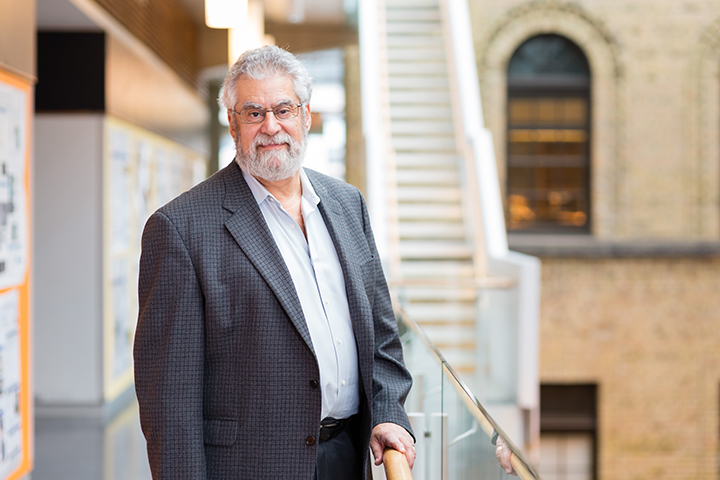 “Medicine by Design offers a remarkable opportunity to do high-impact research that has the potential to advance and even redefine key areas of regenerative medicine,” said Michael Sefton, who will become the initiative’s new executive director on July 1, 2017. (Photo by Neil Ta)

Engineering professor Michael Sefton has been appointed executive director of Medicine by Design, a University of Toronto initiative that is accelerating discoveries in regenerative medicine research to improve treatments for conditions such as heart failure, diabetes and stroke.

Sefton, a pioneer in tissue engineering and biomaterials, takes over from Peter Zandstra, who is stepping down to lead a new school of biomedical engineering at the University of British Columbia.

Medicine by Design was established in July 2015 with a $114-million grant — the largest single research award in U of T’s history — from the federal government’s Canada First Research Excellence Fund. The initiative builds on U of T’s rich legacy of contributions to stem cells and regenerative medicine, starting in the early 1960s with the identification of blood stem cells by biophysicist James Till and hematologist Ernest McCulloch.

In its first two years, Medicine by Design has awarded more than $30 million to more than 100 researchers across U of T and its affiliated hospitals through programs that support a robust pipeline of projects from early stage “new ideas” research to clinical translation and commercialization. Its largest award program funds 20 collaborative teams made up of researchers and clinicians with expertise in life and physical sciences, engineering, medicine and computational biology. Sefton leads a team project that is focusing on using novel biomaterials to stimulate skeletal muscle to fix itself, a process known as endogenous repair. Other teams are tackling diabetes, blindness, and liver and inflammatory bowel diseases, as well as advancing basic research at the convergence of disciplines ranging from stem cell to computational biology.

“By bringing together outstanding researchers and clinicians from diverse disciplines and giving them the resources they need to tackle big questions, Medicine by Design offers a remarkable opportunity to do high-impact research that has the potential to advance and even redefine key areas of regenerative medicine,” said Sefton, a University Professor, the Michael E. Charles Professor of Chemical Engineering and a faculty member in the Department of Chemical Engineering & Applied Chemistry and the Institute of Biomaterials & Biomedical Engineering.

“I look forward to building on the excellent work Peter has done to foster new collaborations and strategically focus the expertise of our community around critical research and its translation into the clinic.”

Medicine by Design’s other activities include supporting the recruitment of established and emerging researchers to strengthen U of T’s capacity in key areas such as synthetic biology and immunoengineering, and working closely with CCRM and industry to identify and advance discoveries with commercialization potential. It is also building international relationships through its Global Speaker Series, as well as its Summer by Design program, a partnership with the Rotman School of Management and CCRM that has brought a dozen PhD students from peer international universities to Toronto this summer for a series of workshops and conferences.

Sefton holds degrees in chemical engineering from the University of Toronto (1971) and the Massachusetts Institute of Technology (1974), and has been at the University of Toronto since 1974. He has been active in the preparation of blood compatible materials through heparinization, the microencapsulation of mammalian cells in synthetic polymers and various strategies for vascularizing tissue constructs.

Sefton’s five-year term as Medicine by Design’s executive director will begin on July 1, 2017.