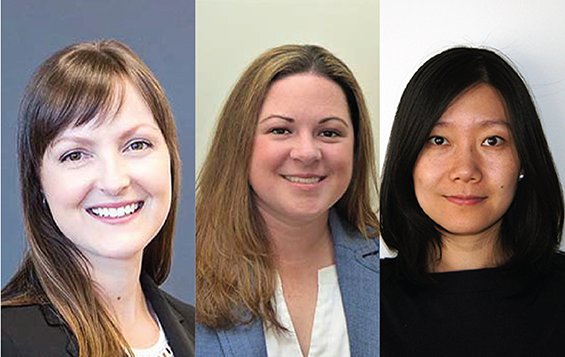 Three New Investigators bring their expertise to the Medicine by Design community: Kristin Hope (left) and Courtney Jones (centre), who both study blood stem cells at the Princess Margaret Cancer Centre, University Health Network; and Chao Wang (right), who studies the role the immune system plays in the progression of neurological disorders at Sunnybrook Research Institute.

Medicine by Design has welcomed three new investigators into its community of regenerative medicine researchers at the University of Toronto (U of T) and its affiliated hospitals.

Investigators Kristin Hope, Courtney Jones and Chao Wang will bring their expertise to the Medicine by Design community. Medicine by Design is an initiative that integrates research in previously distinct disciplines and, by doing so, speeds up the pursuit of transformative advances in regenerative medicine and health care.

These investigators join a cohort of 15 faculty members who have been supported by Medicine by Design’s New Investigators program. The program recruits talented new researchers as part of Medicine by Design’s mandate to renew and diversify scientific leadership in stem cell and regenerative medicine at U of T and its affiliated hospitals. Medicine by Design has a commitment to equity, diversity and inclusion across all of its programs including recruitment.

Hope joins UHN from McMaster University’s Stem Cell and Cancer Research Institute, where she was an associate professor. Now, as a senior scientist at Princess Margaret, her lab will build upon her McMaster University research program to explore the underlying processes that control the behaviours of stem cells in the blood system as well as those that drive blood disorders and cancers. Hope says her team hopes to aid the advancement of stem cell-focused regenerative therapies and cancer treatments.

Hope, who is also an associate professor in the Department of Medical Biophysics at U of T, says making connections with Medicine by Design’s multi-disciplinary community of scientists who are engaged with solving some of the most difficult questions in regenerative medicine will help her and others realize the potential of stem cell-based medicines.

“I think this bringing together of researchers, each with a deep knowledge in their own discipline but working together towards this common goal, is quite unique not only in Canada but in the world,” Hope says. “It’s very exciting to be a part of this group – we’re looking forward to contributing our insights and forging new and fruitful collaborations with the team.”

Before setting up her independent lab at Princess Margaret, Jones was a post-doctoral fellow in Craig Jordan’s lab at the University of Colorado Denver Medical Center. Jones continues this work in Toronto, focusing on studying the role of metabolism in leukemia stem cells and normal blood stem cells, with the goal of identifying pathways that are essential for stem cell function. She aims to exploit these pathways to better eradicate leukemia stem cells and improve outcomes for patients with leukemia.

“I don’t think there’s any place better in the entire world for stem cell biology than the Princess Margaret Cancer Centre. I’m excited to join the team here and work alongside experts like [Medicine by Design-funded researcher] Dr. John Dick,” Jones, who’s also an assistant professor in the Department of Medical Biophysics at U of T, says. “And I look forward to new relationships and collaborations with other Medicine by Design researchers.”

Wang, whose studies focus on immunology, agrees that being part of the Medicine by Design community will give her an opportunity to make new collaborations and connections.

“Medicine by Design is a great gathering place for people with like-mindedness. I think it provides an excellent platform for scientists to connect across diverse disciplines. I look forward to being part of the community,” Wang says.

Her lab, at Sunnybrook Research Institute, looks at the role the immune system plays in the progression of neurological disorders such as cognitive impairment and major depressive disorder. Her research investigates whether immune cells can be manipulated to help the brain repair itself.

Wang, who is also an assistant professor of immunology at U of T, is returning to Toronto after several years. She earned her PhD at U of T, supervised by Tania Watts in the Department of Immunology, and completed a post-doctoral fellowship in neuroimmunology supervised by Vijay Kuchroo at Harvard Medical School and co-mentored by Aviv Regev at Broad Institute and MIT. She was also an instructor and then an assistant professor of neurology at Harvard Medical School.

“I am thrilled to return to Toronto, as it is a place that nurtured me as a scientist, and to be able contribute to the scientific community locally gives me a great sense of fulfillment,” Wang says. “Toronto is one of the leading hubs for scientific discovery and I consider it one of the best places to translate my research clinically.”

Hope is also returning to Toronto. Before beginning her career as an independent investigator at McMaster University, she completed her PhD at U of T in the lab of John Dick, and then did a post-doctoral fellowship supervised by Dr. Guy Sauvageau at the Université de Montreal. She says that her decision to move back to Toronto was based on both professional and personal factors.

“Basic and translational science are done here hand in hand and, as the birthplace of stem cell research in Canada, Toronto has a fantastic community of stem cell scientists. Toronto has so much to offer as a city but is also a great central location with easy access to parks and nature trails.”

Jones is new to Toronto. Prior to her post-doctoral fellowship in Colorado, she received her doctorate from William Carroll’s lab, which specializes in pediatric leukemias, at the New York University Langone Medical Center.

“I decided to come to Toronto because of the collaborative environment and expertise in stem cell biology. Through Medicine by Design, I am excited to be connected to a vast community of stem cell experts and learn how metabolism may influence stem cell populations beyond the blood system.”