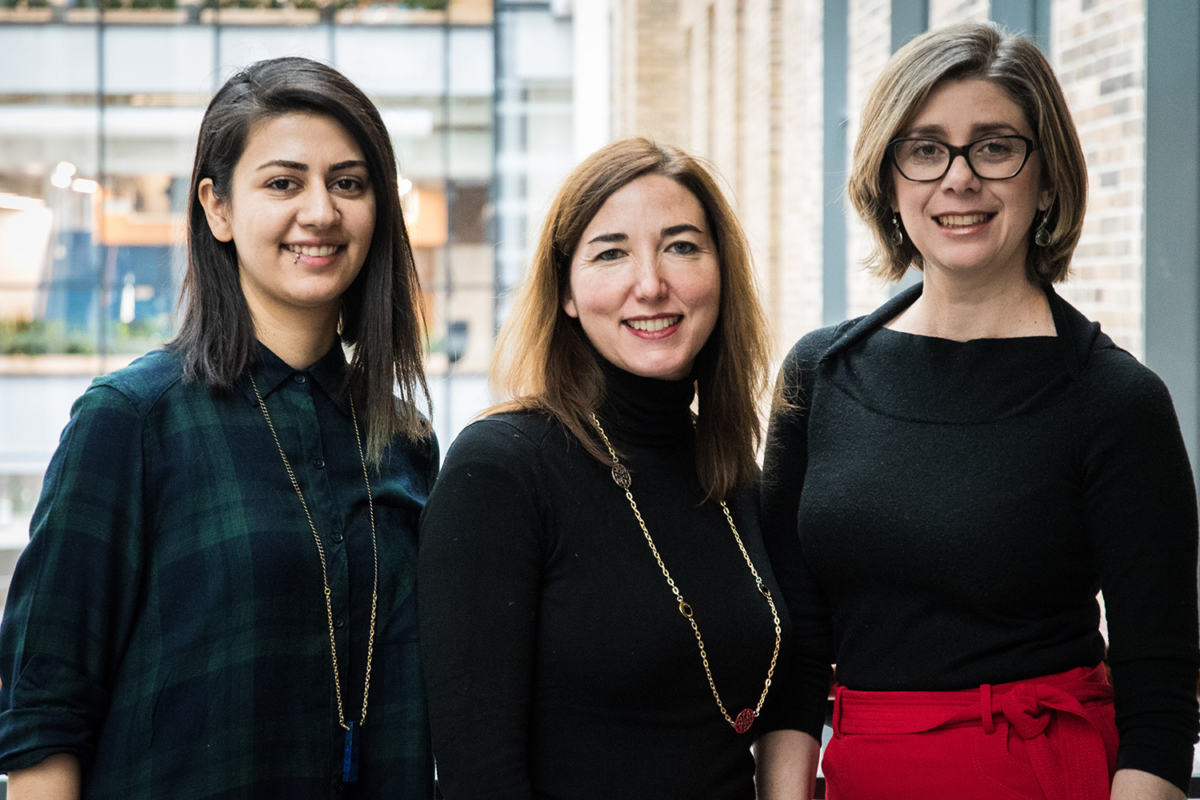 Cristina Nostro (centre), a scientist at University Health Network’s Toronto General Hospital Research Institute (TGHRI), leads a multidisciplinary Medicine by Design team looking at whether lab-grown pancreatic progenitor cells could be a viable alternative to donor islets as a transplant option for patients with type 1 diabetes. She is collaborating with Sara Vasconcelos (right), an assistant scientist at TGHRI who specializes in generating tissue with functional blood vessels, and post-doctoral fellow Yasaman Aghazadeh (left).

Nearly 20 years ago, Canadian researchers developed the Edmonton Protocol, a revolutionary treatment for type 1 diabetes in which insulin-producing islet tissue from a donor pancreas is transplanted into a patient to restore their ability to regulate sugar in the blood. 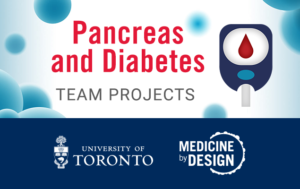 Since then, more than 2,000 islet transplants have been performed worldwide, but the shortage of donor pancreata means the procedure is not available to most patients who could benefit from it. “The procedure is overall very successful, but tissue scarcity is a real problem,” says Yasaman Aghazadeh, a 2017 Medicine by Design Post-Doctoral Fellowship Award recipient working in the laboratories of Cristina Nostro and Sara Vasconcelos at the Toronto General Hospital Research Institute, part of University Health Network (UHN).

That’s not the only challenge. “Right now, the majority of these donor islets die within the first few days after transplantation because they don’t have enough support in the form of nutrients or oxygen,” explains Aghazadeh. “As a result, one patient may need tissue from up to three different donors, so fewer than 0.001 per cent of patients can obtain a tissue transplant.”

Those odds are better than getting struck by lightning or winning the lottery, but not by much. For the remaining 300,000+ type 1 diabetes patients in Canada, insulin injections remain the only option. Despite advances in insulin formulations, delivery and monitoring, many people with type 1 diabetes continue to suffer devastating complications from the disease, including kidney disease, amputations and blindness.

That’s why two cross-disciplinary teams funded by the University of Toronto’s (U of T) Medicine by Design initiative are working on novel regenerative medicine approaches they hope will lead to new solutions and better outcomes for people with type 1 diabetes. The projects are two of 19 team projects Medicine by Design is funding as part of its mandate to accelerate regenerative medicine breakthroughs and translate them into new treatments for common diseases. Medicine by Design is made possible thanks in part to a $114-million grant from the Canada First Research Excellence Fund — the largest single research award in U of T’s history. 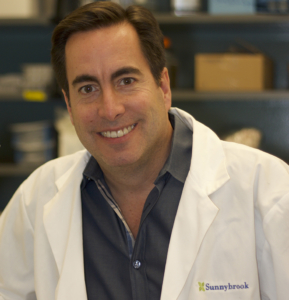 Juan Carlos Zúñiga-Pflücker, a professor and chair of U of T’s Department of Immunology and a senior scientist at Sunnybrook Research Institute, is leading a Medicine by Design team that is pursuing two intersecting strategies to treat diabetes.

Type 1 diabetes is, first and foremost, an autoimmune disease in which a person’s immune system begins to attack and kill the insulin-producing beta cells, leaving them incapable of regulating blood sugar. With an immune system constantly on high alert for new beta cells to attack, a treatment will not be as simple as merely delivering replacement cells. Since we don’t know what triggers the immune system to launch an attack on healthy beta cells, researchers are working to outwit the autoimmune response using a number of different strategies. Juan Carlos Zúñiga-Pflücker, a professor and chair of U of T’s Department of Immunology and a senior scientist at Sunnybrook Research Institute, is leading one Medicine by Design team that is pursuing two intersecting strategies. One seeks to suppress the immune response, while the other is developing a “cloaked” beta cell capable of evading an immune attack.

The immune suppression approach involves careful control of the body’s immune cells, most of which are found in the bloodstream.

“We thought the best way to do this is to use the immune system to create a state of tissue tolerance to the graft,” explains Zúñiga-Pflücker.

To suppress the immune response, the team is manipulating T-cells, a type of white blood cell that responds to various cues to attack abnormal cells such as those that have been invaded by a virus or are cancerous. But T-cells don’t always get it right: in the case of an autoimmune attack, they incorrectly respond and kill healthy cells.  One of the project team members, Naoto Hirano, a senior scientist at the Princess Margaret Cancer Centre at UHN and an associate professor in U of T’s Department of Immunology, is working to suppress these misdirected T-cells. He aims to convert them into regulatory T-cells (or T-regs), another type of T-cell that acts as a suppressor, allowing the body to tolerate certain cues that would otherwise lead to an autoimmune attack.

Our blood normally has some T-regs lurking about, ready to pounce if called upon. Unfortunately, probably due to their relative scarcity in the blood, they cannot launch an adequate attack against the faulty T-cells in autoimmune disease.

It would make sense, therefore, to increase the number of T-regs in a patient’s blood so they can protect the body’s vulnerable cells and organs from autoimmune attack. But, says Hirano, “It’s not so simple. T-regs are just so very rare and not easy to expand.” To overcome this, Hirano began looking elsewhere. He showed that when the protein FOXP3 was added to the more abundant T-cell populations, they could be converted to T-regs. So far, the team is pleased with the immune suppression they can achieve with the T-regs they have generated to date.

“I’m always optimistic, but science is science,” says Hirano. “We have very important data on how FOXP3 degradation is controlled that will make a very good paper. But there’s more work still to be done.” Next, they will study whether these T-regs can stop autoimmune attacks in diabetic mice.

The second approach that Zúñiga-Pflücker’s team is exploring centres on modifying beta cells, which are the target of the autoimmune attack in diabetic patients. For this work, he turned to Nostro and Andras Nagy, a senior investigator at the Lunenfeld-Tanenbaum Research Institute at Sinai Health System and a professor at U of T’s Department of Obstetrics & Gynaecology and Institute of Medical Science.

For several years, Nostro has been successfully working to improve the quality of beta cell populations grown in her lab. It’s a competitive field of research, and she is among the world’s best. Nagy is a leader in the development of induced pluripotent stem cells and in engineering them to display desirable characteristics. In this project, Nagy and Nostro have teamed up to create a population of stem cells that could then be grown into replacement beta cells carrying the same cloaking gene. These cloaked cells would be able to evade an immune attack by becoming undetectable to the immune system. A year and a half into the project, the team is making progress in mice and is beginning to see how it could be applied to humans.

“Because the immune system is able to recognize an infinite number of different things, and in an environment where a person has already had an autoimmune response, we always felt that even the best cloaked cell may still be recognized. The immune system always finds a way,” says Zúñiga-Pflücker.  “That’s why we wanted to combine the two approaches [immune suppression and cell cloaking], as an extra level of security so the tissue would not be rejected. We hope this research gives us the ability to ask whether it is sufficient to prevent a response.”

If the answer is yes, this approach could be applied as an off-the-shelf solution for a much broader range of immune challenges, such as tissue or organ transplants in which rejection carries immense risk, or other forms of autoimmune disease.

The complicated business of cell survival

Even with a modulated immune system, beta cell transplantation still has challenges that have yet to be fully overcome. Since donor islets are in short supply, researchers have turned to lab-grown beta cells as a possible source of the quantity of cells that will be needed.

In a second Medicine by Design-funded project, Nostro is looking at whether pancreatic progenitor cells grown in the lab could be a viable alternative to donor islets as a transplant option for patients. Pancreatic progenitor cells are a type of stem cell that can produce all the cells in the pancreas, including the beta cells that reside in the islet and produce insulin.  These cells have already been tested in clinical trials in Canada and elsewhere with some success, but improving their survival after transplantation will be key to deliver an optimal therapeutic product.

For any cell, survival depends on obtaining the right nutrients. In the lab, this is relatively easy, since cells in a petri dish are essentially swimming in all the nutrients they need. In the body, however, delivering these nutrients to cells in the middle of solid tissue requires a network of blood vessels. Therefore, establishing a blood supply to newly transplanted cells or tissues is critical to their long-term survival and is currently a major bottleneck in the production of large tissues.

For beta cells, connection to a blood supply is especially important. “Because of their function, beta cells need to be in close contact with the blood system. In fact, it is speculated that every beta cell is either connected with a vessel or, at most, is just two cells away from a vessel,” says Nostro who, in addition to her role as a scientist at UHN, is also an assistant professor in the Department of Physiology at U of T.

“This close connection allows the beta cell to constantly monitor and regulate blood sugar,” Nostro continues. “Unfortunately, when we make beta cells in the lab they lack this interface.”

So Nostro teamed up with Sara Vasconcelos, a scientist at UHN and assistant professor at U of T’s Institute of Biomaterials & Biomedical Engineering, an expert in engineering tissues with functional blood vessels (also referred to as vascularized tissue). Together, they are working to overcome the current limitation in pancreatic progenitor transplantation by generating a highly vascularized islet. Nostro and Vasconcelos are enthusiastic about the progress seen in initial, as yet unpublished, experiments.

Nostro and others are convinced that finding a way to integrate transplanted cells with a supportive network of blood vessels will be critical to achieving a successful cell-based diabetes treatment. Effectively combining their efforts with cell cloaking and immune suppression may be a significant and long-awaited advance in type 1 diabetes management.

Read about more Medicine by Design research in diabetes

The pancreas and diabetes

The pancreas is a small organ located behind the stomach. One of its functions is to produce hormones the body needs. Within the pancreas are about 3 million clusters of cells, called islets, found in close proximity to tiny blood vessels. The islets contain four main types of cells, each of which produces a specific hormone. One of these cell types, the beta cell, responds to higher levels of sugar in the blood (for example, after we eat) by producing the regulating hormone insulin.

Type 1 diabetes accounts for about 10 per cent of all diabetes cases. It is an autoimmune disorder in which the body’s immune system attacks the beta cells in the islets of the pancreas. Without beta cells, the body is unable to produce insulin, which coverts sugar in the blood into energy the body can use. Type 1 diabetics must take regular injections of insulin as a matter of survival.

About 90 per cent of people with diabetes have type 2, which occurs when the body does not use insulin properly, or does not produce enough insulin. The cause of type 2 diabetes may be genetic and/or environmental, including diet and level of physical activity. Less severe cases can be managed through meal planning and exercise, while more severe cases may require medication and/or insulin.