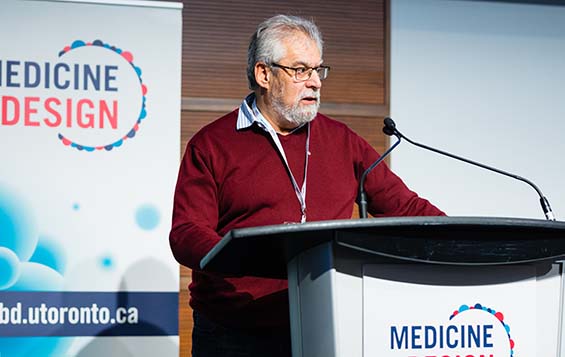 Medicine by Design Executive Director Michael Sefton at a past Medicine by Design symposium. Sefton, University Professor, Department of Chemical Engineering & Applied Chemistry and the Institute of Biomedical Engineering, University of Toronto, just received an almost $430,000 JDRF grant to continue to study if cells found in the skin can play a key role in enabling stem cell transplants for diabetes.

Can “dendritic” cells found in the skin be an important piece of the puzzle of enabling stem cell transplants for diabetes?

Renowned University of Toronto tissue engineer Michael Sefton is sure enough about the possibility that he is about to launch a major new chapter in his research, supported by a grant of almost $430,000 from JDRF.

Back in 2000, a research team at the University of Alberta proved that islet cells (also called islets of Langerhans), which produce insulin and are found in the pancreas, could be transplanted from a donor into the livers of people living with type 1 diabetes. The patients they treated saw their diabetes disappear for long periods of time. They no longer needed to inject insulin. The procedure came to be known as the Edmonton Protocol.

“It was a huge finding from that group,” say Sefton, executive director of Medicine by Design and University Professor at the Department of Chemical Engineering & Applied Chemistry and the Institute of Biomedical Engineering at the University of Toronto. “But the problem was the liver. It was a hostile environment to those new cells and mounted an immune response that killed many of them and the patients’ diabetes returned eventually.”

But it got Sefton thinking. What if there was a better place to implant the cells?

He thought of the skin. Research had proven that the skin — or just under it — is an area less likely to be hostile to transplanted cells such as pancreatic cells. Not only that, but implanting cells under the skin is less invasive than doing so in the liver. The cells could be retrieved more easily — which might make the therapy safer for the patient

But this method raised another problem. The skin has too few blood vessels to enable the implanted cells to survive and enable the body to manage blood sugar. Could scientists find a way to create blood vessels?

In 2016, JDRF awarded Sefton $1.1 million to explore this possibility. To create the blood vessels, the Sefton team used a material that contained methacrylic acid (MAA). “Once we insert a polymer gel with MAA under the skin, the MAA interacts with the living system in the body (mice are currently being used) and it creates the blood vessels. We’re just beginning to understand how MAA works. And this enables the implanted pancreatic cells to deliver insulin throughout the body to do its work in controlling blood sugar and, thus, stopping the diabetic condition.”

Another major hurdle was obtaining enough pancreatic cells for transplant. Sefton, whose lab is located at the Donnelly Centre for Cellular and Biomolecular Research, says about a million pancreatic islets (each islet contains about  a thousand cells) were needed for each patient treated through the Edmonton Protocol model. Acquiring those islets often required two donors.

But now, Sefton says, scientists like Maria Cristina Nostro, who is a senior scientist at McEwen Stem Cell Institute, University Health Network, and a Medicine by Design-funded researcher, can create insulin-producing cells from stem cells, which provides an unlimited supply.

With these big problems solved, the team still has another one to deal with — the immune response that the body mounts when the new pancreatic cells are transplanted.

The body’s natural response is to reject, say, a new heart or kidney. It’s the body going after what it perceives to be invaders, in the same way the immune system attacks bad bacteria or viruses that have entered the internal system.

While, as Sefton says, the skin tends to respond differently than the liver, there will still be a response enacted that will try to reject the transplanted pancreatic islets once implanted.

And this is where Sefton believes the dendritic cells can play an important role.

Discovered by German pathologist Paul Langerhans (the same scientist who also discovered the pancreatic islets named for him) in 1869, dendritic cells are powerful immune cells found in the skin.

“They will, of course, mount an immune response once we implant the pancreatic islets. But we believe that the MAA has properties that will work on the skin’s dendritic cells to be tolerant of the pancreatic cells. We don’t want to suppress the immune system, because that is dangerous for the patient. We want to fool it into accepting the new pancreatic cells as if they are part of the patient’s body. And if we can do that, we’ll have taken a huge step forward.”

Sefton and his team will use the new JDRF grant over the next two years to continue to explore this hunch.

This level of adventurous health science research isn’t new to Sefton — he’s built a record for innovation in biomedical research that has earned him global respect.

In 2003, he was named a University Professor, the highest honour U of T bestows on its faculty. In 2017, he was honoured with the Order of Canada for his leadership in biomedical engineering. Before joining Medicine by Design, he was director of U of T’s Institute of Biomedical Engineering, leading its development into one of the best in its field in North America. Among his many achievements as a scientist, he was one of the first to combine living cells with polymers, effectively launching the field now called tissue engineering.

Today, as the executive director of the Medicine by Design strategic research initiative, Sefton speaks with both pride and excitement about the work of the scientists tackling difficult health challenges using regenerative medicine, a branch of health research and treatment that has exploded globally since stem cells were discovered at Toronto’s Princess Margaret Hospital — now Princess Margaret Cancer Centre — by scientists James Till and Ernest McCulloch in 1961.

“The hallmark of our approach is the convergence of scientists from a multitude of disciplines across the University of Toronto and our nine partner research hospitals. We’ve got biologists, biochemistry experts, physicists, engineers and specialists in all aspects of medicine working together and sharing ideas. Our goal is to think way beyond the obvious and to act boldly in finding ways to improve treatment and maybe even cure major diseases.”

Medicine by Design was founded in 2015 with the largest research award in U of T’s history — $114 million from the Canada First Research Excellence Fund. The projects in Medicine by Design’s portfolio focus on using stem cells as living therapies, harnessing the body’s capacity for repair, disabling the triggers of disease and creating technologies to advance regenerative medicine.

Within that slate of exploration, Medicine by Design research teams are making progress on treating a multitude of diseases, such as restoring vision lost to age-related macular degeneration, using stem cells to treat diseased livers in patients who have no hope of a liver transplant, stopping dangerous and hard-to-diagnose abdominal aortic aneurysms before they do their damage and creating methods to help the brain repair itself after stroke.

“We place a huge emphasis on new ideas and research that is risky,” says Sefton. “That’s the way you have to think when you want to really change things. I want people to hear about our work and think that what we are trying to achieve is impossible. l believe firmly that when it comes to disease, we don’t have to just accept what nature gives us with, say, cancer or stroke or diabetes. We can do better than nature.”

He also emphasizes that advances in technology are essential components in enabling breakthroughs. He points to the importance of tools like CRISPR, a powerful gene editing method that won the Nobel Prize for Emmanuelle Charpentier and Jennifer Doudna in 2020, for creating opportunities that were unthinkable even 30 years ago. “That’s why I say that 30 years from now, regenerative medicine will be at the centre of how we treat disease. It will be standard practice and it will be giving us a level of health we would have never thought possible. We may well be able to even eliminate many diseases.”

What got Sefton interested in biomedical engineering in the first place?

“We have engineering in our family. My father and brother were civil engineers. I got interested in chemistry and chemical engineering. When I was doing my engineering degree at U of T, I had a professor who showed me how you could combine engineering with medicine and I remember thinking, “Wow, that’s cool. That sounds exciting. I think I’d like to try that.”