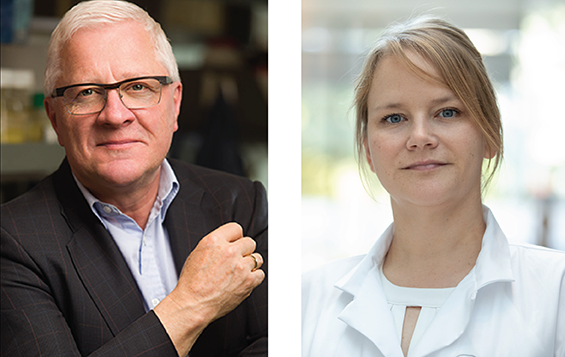 New research from a team of University Health Network (UHN) stem cell scientists has demonstrated that blood stem cells possess a previously undescribed property that they term latency. Latency governs whether a stem cell quickly kicks into action during a transplant or whether it is delayed in getting activated.

When stem cells are activated quickly, over time they become exhausted, while those that delay their activation are better able to self-renew and sustain a pool of stem cells over the long term while still continuing to make blood. Latency is controlled by a previously little-understood gene called INKA1.

Published in Nature Immunology on May 6, the researchers say the findings lay groundwork that could lead to methods for expanding stem cell numbers from donated cord blood biobanks to improve availability for people with leukemia in need of a hematopoietic stem cell transplant.

“If we could control this process by manipulating INKA1, we might be able to produce better numbers of stem cells and the immediate benefit would be a method to enhance the numbers of stem cells people need,” says John Dick, lead author of the study and senior scientist at UHN’s Princess Margaret Cancer Centre. A renowned stem cell researcher, Dick focusses his work on blood development and how miscues in this process lead to diseases such as leukemia.

The research has been funded in part through Medicine by Design. Funded by a $114-million grant from the Canada First Research Excellence Fund, Medicine by Design brings together more than 150 principal investigators at the University of Toronto (U of T) and its affiliated hospitals to advance regenerative medicine discoveries and accelerate them toward impact.

“Our tissues are sustained by cells regenerating constantly,” says Dick, who is also Canada Research Chair in Stem Cell Biology and a professor of molecular genetics at U of T. “But of all the tissues, blood turns over the most.”

Dick explains that about a hundred billion new blood cells are made daily in the body. “And this production is done under tightly controlled parameters – our blood system produces a certain number of red cells, white cells, and platelets.”

But when the blood is stressed — that is, when you suffer an infection or a loss of blood or when you transplant stem cells, — the hematopoietic stem cells (HSC) kick in. They are found in bone marrow and can create any kind of blood cell.

But they are rare in the body, and nature has figured out a way to preserve them for when they are needed most to be able to sustain blood production for a lifetime.

This is where INKA1 comes in.

When the stress first happens, some stem cells proliferate massively and differentiate to release a huge number of cells that will do their job as infection-fighters and replace blood cells that had been lost, but only for a short time.

“But INKA1 works as a restraining factor in a subset of HSC,” says Kerstin Kaufmann, scientific associate in Dick’s lab. The gene keeps some, long-lasting HSC in a dormant or “quiescent” state, only activating them when the short-term cells are exhausted.

“This system works in a sprint and marathon way,” adds Kaufmann. “If you’re a sprinter, you have to use your resources fast and they become depleted quickly. But if you’re running a marathon, you need to keep your energy restrained for a long time. So, with the stem cell system, it’s not that one set of cells is better than another, it’s that they are both needed and work together.”

The researchers believe this knowledge can be applied to treatment of leukemia, a common cancer. In a groundbreaking finding 25 years ago, Dick showed that leukemia is initiated and sustained by cells that behave like stem cells called leukemia stem cells. The disease produces an overabundance of “blast” cells. In their healthy state, these cells — red and white —are good at fighting infection. But as leukemia, they behave abnormally and crowd out the normal blood cells.

Stem cell transplantation — also known as a bone marrow transplant — has become a frequently used and usually successful method of treating leukemia. The procedure involves administering chemotherapy, which kills the patient’s cancerous stem cells. Then, through a process called “engraftment,” a donor’s stem cells are transfused into the patient’s blood so the production of healthy red and white blood cells can begin again.

“It’s the ultimate cell replacement therapy,” says Dick. “Every year, about 50,000 people globally undergo what is called an allogeneic transplant, meaning the stem cells come from a healthy matched donor, preferably a relative.”

A huge problem is that two-thirds of people who need the transplant don’t have a related matched donor.

One way to acquire the cells, however, is from cord blood banks where it is easier to find matched donors since these banks reflect the genetic diversity of the population that includes the leukemia patient needing the transplant.

These cells are found in the umbilical cords and placentas of babies after they are born. “Currently, cord blood stem cells can only be used on children and smaller adults as a single cord sample does not contain enough stem cells. Sometimes two cords are combined for an adult but this requires more tissue matching. Ideally HSC from a single sample could be expanded to produce enough HSC needed for adults, but the problem is that every time you put stem cells into a culture, they tend to become weaker and you lose HSC numbers. They are activated but they don’t retain the hallmark of stem cells – being able to renew themselves.”

But Dick thinks INKA1 could play a role in solving this problem by controlling how HSC become activated during the culture expansion so they retain their long term regeneration potential instead of being exhausted.