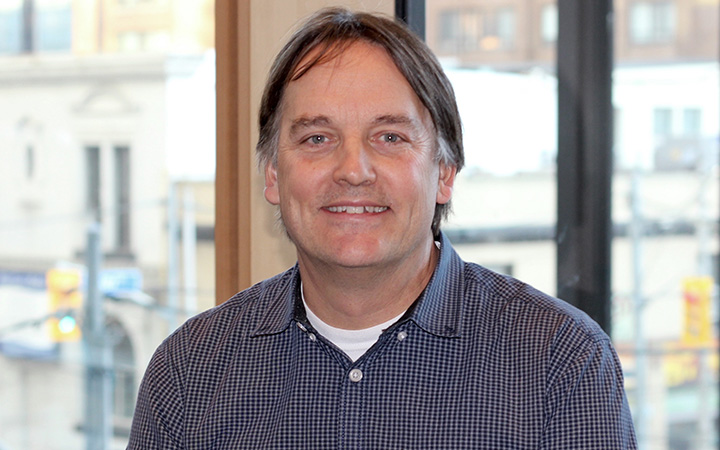 Giles Santyr, a senior scientist at SickKids Research Institute and professor at U of T`s Department of Medical Biophysics, is using his New Ideas funding to test whether novel MRI techniques can be used to track where stem cells go in the lungs and what happens to them when they get there. “Seeing is the first step to making something work better,” Santyr says. (Photo provided by SickKids Research Institute)

The medical biophysicist and senior scientist at SickKids Research Institute has pioneered novel techniques that enable doctors to use magnetic resonance imaging (MRI) to look inside patients’ lungs, something that isn’t possible with conventional MRI. These innovations have allowed for more timely and targeted treatments for chronic diseases such as cystic fibrosis.

Now, with the support of a New Ideas Grant, Santyr will test whether those same imaging approaches can be used to track where stem cells go when they are introduced into the lungs and what happens to them when they get there.

“The techniques we are testing have been used previously for cancer cell detection, but not for stem cells,” says Santyr, who is also a professor in the University of Toronto’s Department of Medical Biophysics.

The project could provide crucial information for researchers trying to harness regenerative medicine to halt and even reverse diseases in which the lining of the lung is damaged or underdeveloped. Cystic fibrosis lung disease and bronchopulmonary dysplasia, a condition that primarily affects premature babies who have been on ventilators for prolonged periods, are just two of the conditions they think may benefit from stem cell therapies.

With their potential to turn into any cell type in the body, stem cells hold the promise of regenerating or replacing diseased or damaged tissues and organs. Researchers at SickKids have found that pluripotent stem cell-derived alveolar-like macrophages — a novel type of cell that engrafts easily with lung tissue and has a longer lifespan than other types of stem cells that have been tried in the lungs — show early promise in restoring lung function in animals with lung disease. But a crucial step toward developing new treatments is understanding what parts of the lung the stem cells travel to, if and how long they remain viable, and whether lung function has improved as a consequence of the stem cells. That’s where Santyr and his expertise in MRI come in.

MRI is an attractive medical imaging technique because it is non-invasive and does not expose patients to radiation. This is a critical consideration in children, or when doctors want to track the progress of a disease or the effectiveness of a treatment over time. But using MRI to take pictures of the lung has been hampered by a key hurdle: the organ generates a very poor signal due to its low water content, resulting in opaque black images that offer few insights into the lung’s complex structures.

That’s why for the past 30 years, researchers have been using inhaled gases to amplify the signal and produce better MRI images of the lungs. Helium-3 was one of the earliest gases tested for these purposes. But the rarity of helium-3 in nature sent scientists looking for an alternative.

That search led them to hyperpolarized xenon gas. SickKids is one of only three facilities in Canada that uses the harmless, and relatively abundant gas, which patients inhale, hold in their lungs while MRI images are taken, and then exhale. In his office in the airy Peter Gilgan Centre for Research and Learning, Santyr turns his computer monitor to show the difference the gas makes. Instead of dense black shapes found in conventional MRI images, images taken with hyperpolarized xenon show the insides of the lung crisply illuminated down to the tiny, grape-like alveoli, which deliver oxygen to the blood stream and carry away carbon dioxide.

A conventional MRI image of the lungs. (Images provided by SickKids Research Institute)

An MRI image of the lungs after the patient has inhaled hyperpolarized xenon gas.

“We get an extraordinary increase in signal from the lung by way of these gases,” says Santyr. “It’s something like 100,000 times.”

But seeing inside the lungs is only half the equation. Researchers also need to be able to visualize the new cells they introduce and follow them over time. As part of his project, Santyr will test another imaging technique that involves first tagging the stem cells with tiny bar magnets to make them highly visible in the hyperpolarized gas MRI images. A key question will be how many stem cells need to be present for the MRI to detect them since typically only a small number of stem cells reach their target.

Santyr hopes tagging the cells, combined with the hyperpolarized gas, will provide a clearer picture of what happens to stem cells introduced into the lungs — a key step on the road to developing viable regenerative medicine approaches to treating lung disease.

The 2017 New Ideas program, funded jointly by Medicine by Design and the Ontario Institute for Regenerative Medicine, supports projects at the discovery level in the area of stem cell and regenerative medicine research, with a goal of fostering cutting-edge research in stem cell biology or technology.