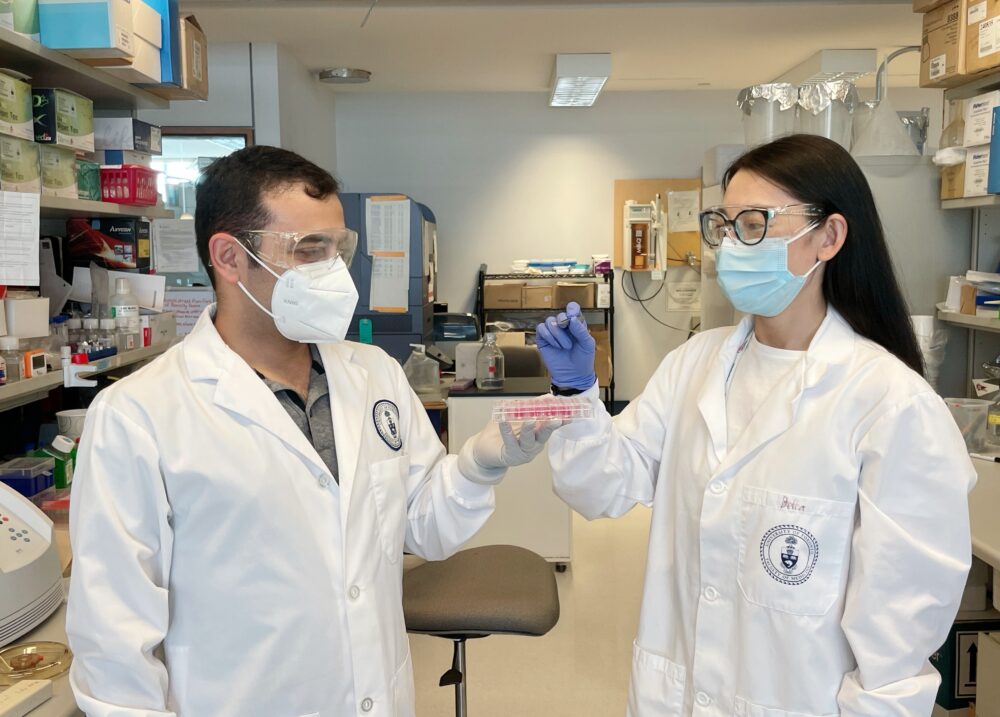 Sadegh Davoudi (left), a post-doctoral fellow, and Bella (Bin) Xu (right), a PhD student, both in the labs of Professor Alison McGuigan and Associate Professor Penney Gilbert, are lead authors on a new paper that details their work creating a regenerative micro-environment in a dish. (Photo by Ting Yin.)

Scientists out of two labs at the University of Toronto have discovered a novel way to test self-repair of skeletal muscle, and this method has the potential to rapidly advance the development of treatments for diseases like muscular dystrophy (MD) and other degenerative muscle conditions.

“If you would have told me before we started this project that creating a regenerative micro-environment in a dish was possible, I would have been skeptical,” says Alison McGuigan, who is a professor at the Department of Chemical Engineering & Applied Chemistry and Institute of Biomedical Engineering (BME) at the University of Toronto (U of T). “After we started working on it, and we realized that it was working, it really pulled the team together and motivated this project, which was largely driven by the graduate students, post-doctoral fellows and research associates in our labs.”

This research, which the McGuigan lab has been working on for the past five years with Associate Professor Penney Gilbert’s lab, has been published in Advanced Functional Materials.

The stem cells present in skeletal muscle tissue have the capacity to repair injured tissue. After the damage occurs, the body activates these stem cells to heal the muscle. But in cases of disease or aging, the regenerative capacity of the stem cells is less effective, leading to degeneration.

Regenerative medicine researchers like Gilbert and McGuigan are focused on harnessing the capacity of stem cells to encourage the body to repair itself — called “endogenous” repair — in cases of major muscle damage including MD and age-related muscle degeneration.

In the team’s model, which they have named MEndR, functional muscle cells (responsible for movement) and muscle stem cells (responsible for repair) are placed in cellulose paper. The team then simulates an injury to the functional muscle cells using a snake venom derivative. Next, they observe as the stem cells get to work regenerating the muscle.

The model will allow researchers to apply different proteins and drugs and see which are the most effective at stimulating stem cell-mediated repair. 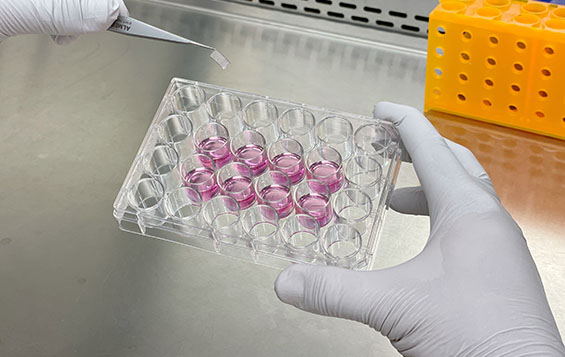 MEndR tissue being picked up from its well. (Photo by Bella (Bin) Xu.)

This discovery is different from other tests that study tissues in a dish, says Gilbert, whose lab is located at U of T’s Donnelly Centre for Cellular & Biomolecular Research, because it does more than simply study if tissue lives or dies, as most of these types of tests currently do.

“Our screen looks at whether the stem cells in the tissue actually work — if the stem cells get woken up and are able to start producing new muscle tissue without depleting their population. This is the first time we’re aware of that this type of research has been published,” says Gilbert, who is a faculty member at BME, and is also cross-appointed with the Department of Cell & Systems Biology.

Sadegh Davoudi, a post-doctoral fellow in the Gilbert and McGuigan labs, says the project was a result of the merging of two independent projects. He was working on identifying new drugs promoting muscle regeneration in mouse models, and at the same time, his colleague Bella (Bin) Xu, a PhD student at the McGuigan and Gilbert labs, was working on developing mini-muscle tissues.

Xu, who is lead author on the study along with Davoudi, credits the design of the model for enabling detailed analysis of how a drug treatment could affect muscle regeneration.

“Our 3D model is accessible, modular and simple, and it allows a level of analysis that that was not possible before due to the limitations of animal models and simple two-dimensional cell cultures. This is truly transformative research and we’re excited to share it with the scientific community,” says Xu.

The advantage of their in-the-dish method is that researchers will be able to test many more drugs or proteins at once, up to 96 at a time, than would ever be feasible in animal studies, bolstering the clinical pipeline for drug and therapeutic development.

This work currently applies to skeletal muscle tissue, but Gilbert, who is also Canada Research Chair in Endogenous Repair, says she could see it being applicable to other tissues as well.

“I would say this work is translatable to other tissues found in the gut, eyes or even the brain. By building on these principles we developed, researchers can look at the stem cells in other tissues to understand whether they can encourage the repair of tissue.”

This research is part of a larger Medicine by Design-funded team project that studies self-repair in brain and muscle tissue. McGuigan had never worked with skeletal muscle before when she was tasked with bringing her lab’s engineering expertise to this work and paired with the Gilbert lab, which has expertise in skeletal muscle and stem cell biology.

“As a team, while we’re focusing on muscle and brain, the larger goal is to form a pipeline for regeneration that is generalizable to other systems in the body,” McGuigan says.

Medicine by Design’s investment in this team has been crucial for advancing this type of tissue engineering work, says Gilbert.

“Even though there’s so much potential in this work, it can be difficult to find funding when you’re just getting off the ground. Medicine by Design has taken the risk and funded this work, and now that we know we can make functional tissues in a dish, we can use our success to secure more funding.”

Video depicts the MEndR concept in three parts beginning with uninjured tissue. Injury is added to the tissue, and then the stem cells become activated, repairing the tissue over seven days. (Video by Sadegh Davoudi and Bella (Bin) Xu.)