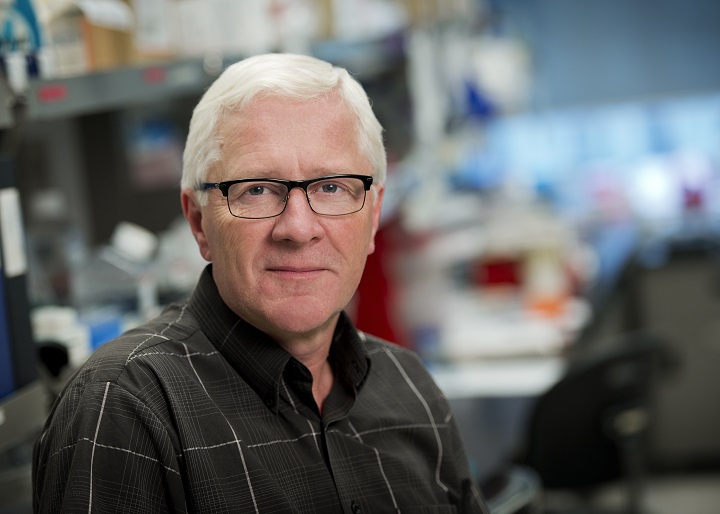 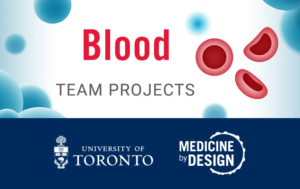 More than 50,000 people around the world receive blood stem cell transplants every year to treat leukemia and other blood disorders, making the procedure “inarguably the most successful and most widely used treatment in regenerative medicine,” says John Dick.

In some cases, these transplants can be done with a patient’s own cells. But those who need donor cells to replace their damaged blood still face a significant hurdle.

“The problem is that you need a transplant match and about two-thirds of people who would benefit from a transplant don’t have a match,” says Dick, a senior scientist at the Princess Margaret Cancer Centre at University Health Network (UHN) and a professor of molecular genetics at the University of Toronto (U of T).

Dick leads one of two collaborative team projects funded by U of T’s Medicine by Design initiative that are trying to overcome this critical barrier. Dick’s team, which includes more than a dozen biologists, computational scientists and engineers from seven laboratories, is taking the small number of stem cells that can be harvested from the umbilical cord and placenta when a baby is born and trying to expand them in the lab to create a plentiful supply of transplant tissue. The project builds on Dick’s life’s work of trying to understand how blood develops and how miscues in this process lead to disease, including his ground-breaking discovery 20 years ago of cancer stem cells as the source of leukemia.

Jason Moffat, a professor of molecular genetics and a faculty member at the Donnelly Centre for Cellular and Biomolecular Research, leads a second Medicine by Design-funded team that is trying to grow blood from scratch in the laboratory to address the short supply of compatible donor tissue.

While the Medicine by Design teams are taking different approaches, they share a common goal: to make this life-saving regenerative medicine treatment available to more patients. 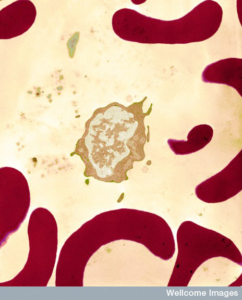 Blood holds many different cell types, each specialized for a particular role. Depicted is an infection-fighting white blood cell surrounded by red blood cells which move oxygen around the body. Proportions of cells are carefully balanced throughout life and shifts in this balance can lead to blood disorders. (Photo: University of Edinburgh/Wellcome Trust)

Blood is incredibly complex, consisting of more than 12 different cell types that move oxygen around the body, fight off infections and help wounds heal. Because these cells don’t last forever, the body constantly makes new ones from blood stem cells throughout our lives.

The discovery of blood stem cells in 1961 by Toronto researchers James Till and Ernest McCulloch opened the door to a new kind of therapy in which a patient’s faulty blood system could be replaced by that of a healthy donor, so long as they are matched to avoid rejection. The blood stem cells can be harvested from the bone marrow, a spongy tissue inside the bone, or from the donor’s circulating blood. Although these cells are rare — in the marrow, only one cell in 100,000 is a stem cell — they are extremely potent; a single stem cell can restore the entire blood system.

A careful matching process ensures donor cells are compatible, reducing the risk the recipient’s immune system will reject the transplant or that the new cells will attack his or her body. But for many people, particularly from diverse ethnic backgrounds, it can be difficult to find a compatible donor. Even when a match is found, by the time the cells are collected and reach the patient, it can be too late.

Umbilical cord blood holds promise in overcoming these challenges because it contains blood stem cells that can be banked to represent the genetic diversity of the population, and can be used immediately. Since the first cord blood transplant was performed in 1988, a global network of cord blood banks has been established, which today provides cells for about 2,000 transplants annually, according to the World Health Organization.

Canada has a number of public cord blood banks that store genetically diverse stem cells. But the number of cells collected from an umbilical cord is tiny and often insufficient for transplantation into adult patients, prompting scientists like Dick to try to make these cells more plentiful by growing them in the lab.

When expanding cord blood, scientists start with a mix of cells in which stem cells are vastly outnumbered by other cell types. Bolstering the number of stem cells is tricky because in the body these cells usually lie idle and do not multiply. When they do divide, they hang in the balance between self-renewal — replicating to make more stem cells — and differentiation into specialized cells such as red blood cells or platelets. For researchers trying to expand stem cells in a lab dish, it has been difficult to achieve the right balance because “we do not fully understand what leads any one stem cell to make this decision,” says Stephanie Xie, a scientific associate in Dick’s lab.

For many years, researchers unknowingly grew cells in a way that impeded self-renewal. Thriving in the dish, instead, were the stem cells’ immediate descendants. These short-term stem cells and so-called progenitor cells are more abundant and multiply faster than long-lasting stem cells, but come with a limited shelf life because they lack the essential trait of stem cells: self-renewal. Because of that, they cannot produce a life-long graft if they are transplanted.

Both short-term and long-lasting stem cells are needed to protect a cancer patient whose blood system is wiped out by chemotherapy. “You need a very rapid graft because otherwise that person is going to die in the next days and weeks,” says Dick. “But you also need the long-term stem cells so that this person will continue to be transplanted for the rest of their life.”

Dick is trying to uncover the cellular machinery behind self-renewal so he can dial it up and get more of the long-lasting cells. To do this, he is collaborating with a number of colleagues from Princess Margaret: Norman Iscove, a stem cell pioneer and professor of medical biophysics at U of T who has a unique cell culture platform for expanding stem cells and uncovering the genes and molecular processes pathways involved in self-renewal; and Mathieu Lupien and Igor Jurisica, also faculty members at U of T’s Department of Medical Biophysics, who investigate, respectively, how epigenetic processes guide DNA folding and how protein interactions control cell signalling. Also on the team are Gary Bader and Quaid Morris, computational biologists at the Donnelly Centre who are in charge of mapping how different blood cells talk to each other and change during development, respectively. Shana Kelley, a professor at the Leslie Dan Faculty of Pharmacy, is building biosensors to monitor cell quality when the team starts growing them on a large scale in collaboration with CCRM.

The team has already gained some insights into how to produce more of the coveted long-lasting stem cells. As Xie and others in the lab recently discovered, fine-tuning how these cells respond to stress could be a way to preserve them.

Stem cells are extremely sensitive to high-level stressors that cause them quickly to unravel and die when, for example, they are taken out of the umbilical cord and placed in a new environment such as a Petri dish or a transplant site in the body. But the team discovered that low or background levels of stress actually protect the stem cells by switching on a self-defence program that cleans up damage caused by hardship and triggers self-renewal.

“Stem cells have these special stress-sensing programs to perform a type of quality control,” Xie says. “If a stressed stem cell were to survive, it would have damaged its DNA and since it is a stem cell all of its multitude of progeny would inherit that damage, leading to blood diseases. So, high-level stressed stem cells are directed to die and other undamaged stem cells can take their place.”

“But they also have the ability to keep themselves alive when they are just exposed to low levels of stress that come from normal blood production,” she added. “In this way, these undamaged stem cells can last a lifetime of any one person.”

Xie has found a chemical that works by dialling up the self-defence part of the stress program that enables stem cells to be protected when they are put into the high-stress environment of cell culture.

The finding is on the edge of clinical translation and Dick is working with CCRM to develop methods for scaling up production of both short- and long-term stem cells for use in patients. 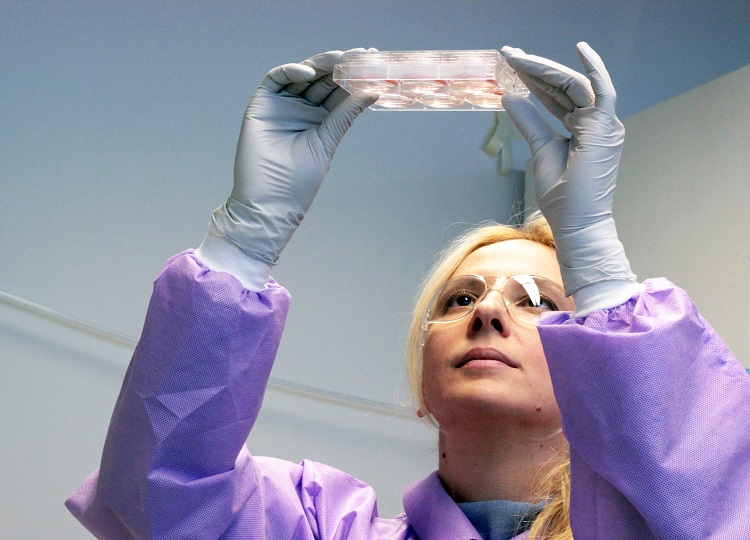 Culturing stem cells and specialized cells derived from them requires painstaking effort. Researchers like Jelena Tomic have to constantly check on the cells to make sure they are growing properly. “These cells need babysitting — you have to watch the cell culture and make sure you can recognize any changes, say in colour or size and border of cell clusters, which could be signs of differentiation.” (Photo by Jovana Drinjakovic)

Down the hall from Dick’s lab is Gordon Keller’s group, which is taking a different approach to making blood stem cell transplants more widely available. They are making blood using pluripotent stem cells, the clean-slate cells that are the source of all other cells in the body.

The ambitious goal brings Keller, director of the McEwen Centre for Regenerative Medicine at UHN, together with Moffat to uncover molecular events that drive blood development in an effort to boost blood-forming cells that could one day be used as transplant tissue. If they succeed, their research could lead to a limitless supply of cells for therapy, skirting the need for tissue donations.

It took trail-blazing scientists such as Keller decades of research to figure out how to turn stem cells into blood-forming cells. The successful approach was to mimic blood development in the dish and grow the stem cells in the presence of molecules the cells normally encounter in the embryo.

“The major problem is that there’s a lot of attrition and you don’t get a lot of cells moving in that direction,” says Moffat. “It’s not clear why certain cells make it and others don’t, and that’s what we are trying to find out.” 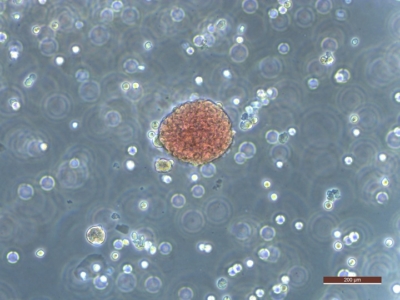 At best, one cell in a hundred becomes the desired blood-forming cell, with the other 99 turning into something else. “It’s really tricky growing these cells because they take on other identities and change on you at any given time,” says Jelena Tomic, a scientific associate who is splitting time between Moffat’s and Keller’s labs.

With the help of Moffat, who brings to the table the revolutionary CRISPR gene-editing tool, the researchers will be able to switch off, one by one, any of the 20,000 human genes in stem cells at any point in time as they develop to become blood cells.

“We can do gene editing at random and determine what key players are important for making blood cells or what inhibitory factors are there that could be eliminated to allow more blood cells to be made,” says Keller.

Short of the long-term goal of making transplant tissue from scratch, the researchers expect to glean new insights into human development that have been beyond reach with traditional methods.

“This is a good example of the impact Medicine by Design can have on the Toronto research community,” Keller says. “It brings together scientists with different expertise, such as cell biologists and molecular geneticists, and provides the resources to tackle big projects that have the potential to lead that to new therapies. From this perspective, Medicine by Design has already been a tremendous success.”