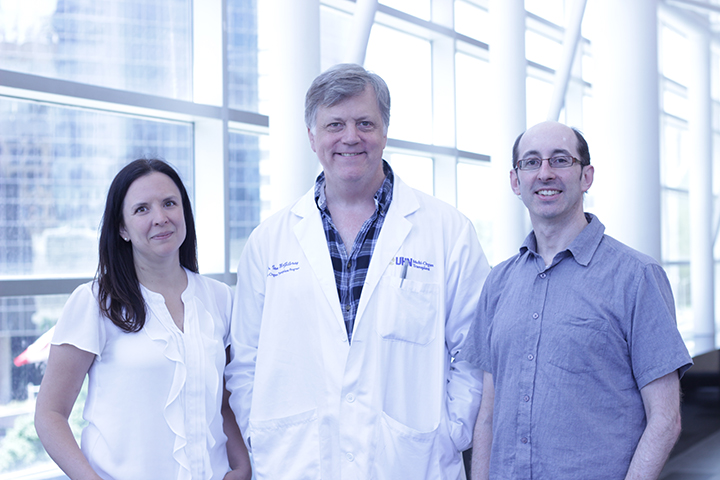 Sonya MacParland (left) and Ian McGilvray (centre), scientists in University Health Network’s Transplant Program, and Gary Bader (right), a professor at the Donnelly Centre for Cellular & Biomolecular Research at the University of Toronto, are part of the collaborative research team that created the first map of human liver cells at the molecular level. (Photo provided by UHN)

Gary Bader returned to Toronto from an organizing meeting of the Human Cell Atlas in 2016 with an ambitious goal: to assemble a team that could map an entire human organ cell by cell, revealing new insights into how it works.

Thanks to the connections Bader has made through Medicine by Design, he and a highly cross-disciplinary group of scientists and doctors at the University of Toronto (U of T) and University Health Network (UHN) have created a map of the human liver, published today in Nature Communications. Believed to be the first time a human organ has been charted at the single-cell level, their work illuminates the basic biology of the liver in ways that could eventually increase the success of transplant surgery and enable viable regenerative medicine treatments for liver disease.

“The liver project came together serendipitously via the Medicine by Design community, and it would not have happened without Medicine by Design,” said Bader, a professor at the U of T’s Donnelly Centre for Cellular & Biomolecular Research and a member of the organizing committee of the Human Cell Atlas, an ambitious international initiative to chart all the cells in the human body.

Medicine by Design is a regenerative medicine research initiative at U of T with a mandate to accelerate discoveries and translate them into new treatments for common diseases. It is made possible thanks in part to a $114-million grant from the Canada First Research Excellence Fund — the single-largest research award in U of T’s history.

A key factor in the success of the liver mapping project was the high concentration in Toronto of researchers and doctors specializing in computational biology, immunology, regenerative medicine and transplant medicine and the new connections Medicine by Design was making among them. Bader had met regenerative medicine expert Gordon Keller, a senior scientist at the Princess Margaret Cancer Centre and director of University Health Network’s (UHN) McEwen Centre for Regenerative Medicine, through Medicine by Design. Keller, in turn, introduced Bader to members of the Medicine by Design liver team he is leading and their colleagues, including Ian McGilvray, a surgeon and research director of UHN’s transplant program, and Sonya MacParland, a liver immunologist at UHN. Jason Fish, another UHN researcher who leads a second Medicine by Design-funded team project focused on the liver, also joined the team.

Just as crucial was Toronto’s expertise in single-cell genomics, a novel technology Bader likens to “a new microscope” that allows researchers to identify individual cells and determine which genes are turned on or off in each. For that, the team turned to Trevor Pugh and Neil Winegarden at the Princess Margaret Genomics Centre at UHN, and Michael Wilson, a scientist at SickKids Research Institute. All three were already collaborating on a Medicine by Design team project focused on brain regeneration that Bader is leading.

Learn more about single-cell genomics in this Research2Reality video

However, the most critical piece was the ready availability of human liver tissue in Toronto thanks to UHN’s large liver transplant program and its approach to transplantation.

“We didn’t choose liver,” Bader said. “I guess you could say liver chose us.”

Surgeons at UHN, including McGilvray, typically remove a small part of the donor liver — called the caudate lobe — before surgery to give them better access to the blood supply and shorten the length of time patients are on the operating table. With the high volume of liver transplants UHN performs each year, it means research teams like this one have access to human liver tissues that many other research centres lack.

“It seems nowhere else in the world has all the pieces, and Medicine by Design put those pieces together,” Bader said.