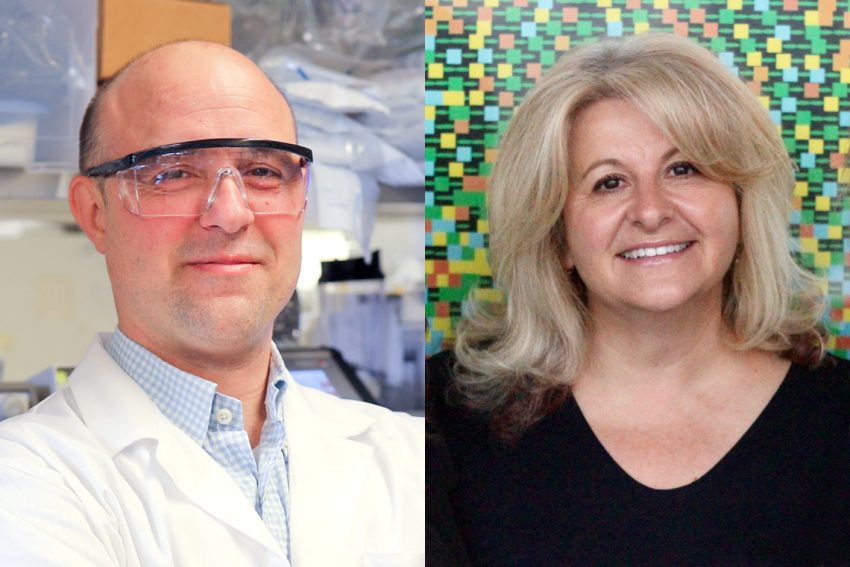 Tiny artificial intelligence (AI)-controlled robots could in the future be tasked with finding and capturing rare stem cells from brain tissue for therapy. While this type of microsurgery can take years to develop, Cindi Morshead and Aaron Wheeler have received a funding boost to make it happen.

“We have previously developed microrobots for manipulating individual cells in a dish,” says Wheeler, a professor at U of T’s Department of Chemistry and the Institute of Biomaterials and Biomedical Engineering. “Now we want to take it to the next level to design robots that can isolate single cells from a crowded environment such as brain tissue and make the system fully automated.”

Wheeler and Morshead, along with Senior Research Fellow and machine learning expert at the University College London, UK, Mike Shaw, won more than $1 million from the new Canada-UK Artificial Intelligence Initiative. Supported by the two countries’ federal governments, the initiative seeks to harness AI for societal benefit by bringing together experts from diverse disciplines.

Stem cells hold promise for regenerative medicine thanks to their ability to self-renew and turn into specialized cells in the body. Scientists across the world are exploring how resident stem cells in the brain can be harnessed to treat neurodegenerative diseases or repair injury.

Morshead, chair of Division of Anatomy at the Department of Surgery and stem cell scientist, and her team previously showed that brain stem cells can be directed to repair stroke injury in mice, and they continue to investigate how to make the repair more efficient.

The clues likely lie in the stem cells’ tissue microenvironment where they are influenced by molecular signals released by neighbouring cells. Scientists are keen to map out this cellular cross-talk, which remains largely unexplored. A tool that can reproducibly pick out defined and intact cells from a complex mix of cells in brain tissue would be an asset. And tiny robots, working at the sub-millimetre scale, could be up for the task.

“Having very methodical repetitive dissections will allow us to feel confident that the behaviours of cells will be similar across samples, which is important for stem cell biology and regenerative medicine,” says Morshead.

Helped with AI expertise from their UK collaborators, the researchers aim to teach the microrobots how to distinguish stem cells and their neighbours from microscopy images of brain tissue through AI and image-recognition algorithms.

A more immediate goal is to pair AI with the existing microrobotic platform Wheeler and Morshead’s teams have developed to manipulate individual stem cells in the dish to gain insight into their molecular makeup and behaviour. They previously demonstrated how cog-wheel shaped microrobots can scoop up and move the cells about. With the help of AI, it should be possible to teach the microrobots how to recognize different types of cells based on their appearance and deliver them to various pipelines for molecular profiling.

“In the long term we would like to have one platform that can start with a slab of tissue and go to collecting the cells of interest,” says Wheeler. “We will end up with a tool that’s useful for lots of folks in the life sciences who are trying to streamline and reproducibly collect interesting cells for further analysis.”

Other funded projects seek to harness AI across different sectors, from countering abusive online language, to improving labour market equality and monitoring global disease outbreaks. The research has the potential to strengthen Canada’s position among the world’s top five economies for AI readiness, according to a recent ranking by The Economist.