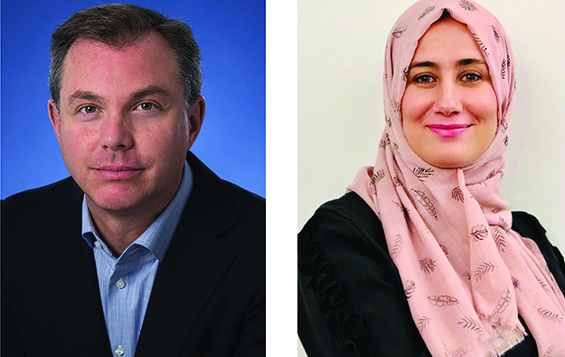 Michael Laflamme (left), clinician-scientist at the McEwen Stem Cell Institute at the University Health Network, and Wahiba Dhahri (right), a former post-doctoral fellow in Laflamme’s lab and lead author on a new study.

When heart muscle is damaged by a heart attack or disease, there are few options for patients.

But thanks to new Medicine by Design-funded research from his lab, published in the journal Circulation, Dr. Michael Laflamme says we are one step closer to a viable therapy to regenerate heart muscle with cell therapy.

“Right now, the only way we can replace the lost muscle after a heart attack is to give the person an entirely new heart, but there are not enough donor hearts to go around,” says Laflamme, who is a clinician-scientist at the McEwen Stem Cell Institute at University Health Network (UHN). “A cell therapy that transplants new heart muscle cells to replace the damaged ones could be a new treatment option for people with end-stage heart failure. And with this study, we’re getting closer to that goal.”

“Researchers thought that immature heart muscle cells would proliferate more and have a better chance of surviving,” says Laflamme. “But in our study, we found that mature cells – cells that we make more adult-like outside of the body before transplanting them – performed better by every parameter that we examined.” 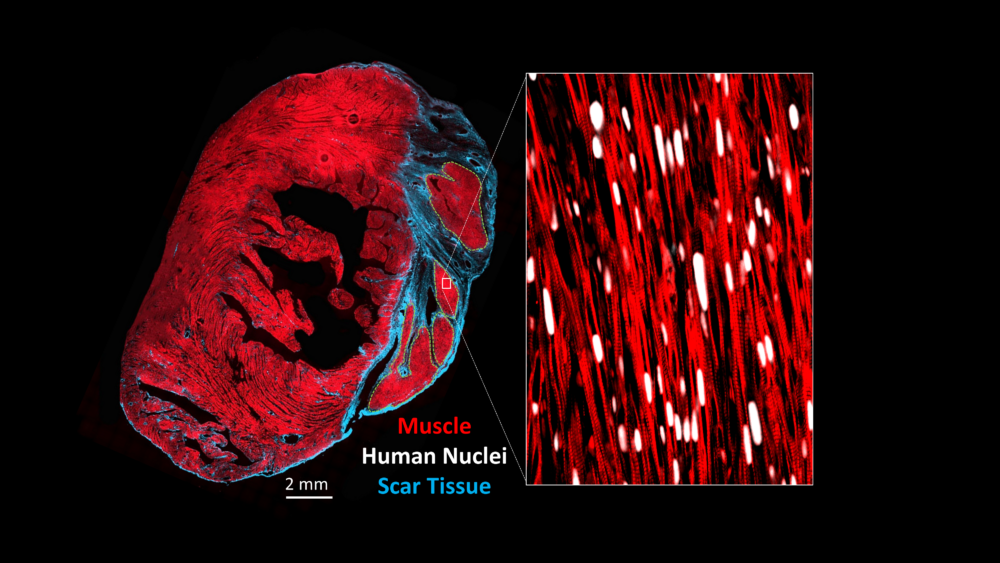 A cross-section through an injured heart that has been transplanted with stem cell-derived heart muscle cells matured using the methods developed in this study. While immature heart muscle cells like those used historically in the field formed highly disorganized grafts, the Laflamme lab’s mature cells formed grafts that were highly aligned and with organized striations like in adult heart muscle. (Image provided by Michael Laflamme).

Laflamme, who’s also an associate professor at U of T’s Department of Laboratory Medicine & Pathobiology, leads a large Medicine by Design team project that is focused on new approaches for regenerating the heart.

The largest hurdle Laflamme’s team observed in their earlier researcher was the risk of arrhythmia, which has the potential to be fatal.

This latest study showed promising signs that mature cells may be the key to overcoming that hurdle, since Laflamme’s team observed no arrhythmia in the animals in this study.

In addition, Laflamme says the grafts of living tissue formed by the mature cells integrated better, contracting synchronously with host muscle, and had better electrical properties than the grafts that his team had observed in the past.

And, he adds, the team was able to produce larger grafts with cells that had a better rate of survival than in their previous studies.

The Laflamme team long has long been interested in testing mature cells in cardiac cell therapies. But using mature cells poses an extra challenge because researchers need a method to mature the cells that could be scaled up to the very large numbers needed for transplantation, which Laflamme says could be a high as one billion per human heart.

He credits a former post-doctoral fellow in his lab, Wahiba Dhahri, and lead author of the study for leading the team in a strategy to mature and scale the cells.

“Dr. Dhahri was inspired by research that showed a method of maturing stem cells using a material called PDMS, a thin film often used in bioengineering. She used a common laboratory tool called a roller bottle – which are bottles that cells can be cultured in – lined with the PDMS and developed practical methods to generate the large number of mature heart muscle cells that she needed.”

Dhahri says this study was an important step forward in researchers’ understanding of cell therapies for the heart.

“Our study was the first to show the link between the mature phenotype of the input cells and the benefits seen in the engrafted heart. This method will have an impact, not only on clinical production with economically and technically feasible platforms, but also on the enhanced quality and safety of the product.”

Laflamme sees a large impact on his work going forward, “With this research, we are optimistic we can develop a much better cell product that’s more likely to make it to clinic. Our next step will be to repeat these results in models that are even more similar to human hearts.”

Laflamme credits funders including Medicine by Design for playing an important role in the trajectory of his research.

“Support from Medicine by Design has been critical in developing the cell technologies in my lab and many other labs across the University of Toronto, UHN and other partner hospitals. Thanks to that support, we’re seeing scientific advances that will truly have a lasting transformative impact on how we treat diseases.”

About Medicine by Design and regenerative medicine