Medicine by Design welcomes computational biologist as a New Investigator

Medicine by Design welcomes computational biologist as a New Investigator 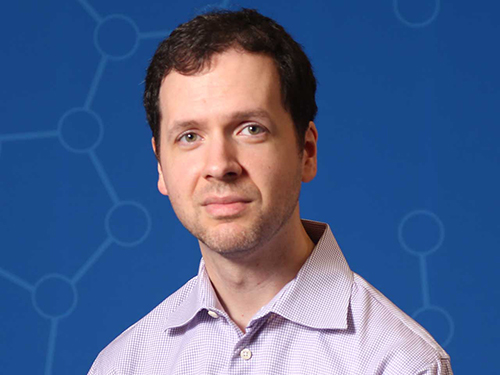 Jesse Gillis returns to the University of Toronto as the inaugural James B. Bassingthwaighte Chair in Integrative Physiology.

Medicine by Design has welcomed a new investigator with expertise in computational biology, Jesse Gillis.

Gillis joins a cohort of 16 faculty members who have been supported by Medicine by Design’s New Investigators program. The program recruits talented new researchers as part of Medicine by Design’s mandate to renew and diversify scientific leadership in stem cell and regenerative medicine at the University of Toronto (U of T) and its affiliated hospitals.

Gillis began his tenure last month as an associate professor in a shared appointment between the Donnelly Centre for Cellular and Biomolecular Research (Donnelly Centre) and the Department of Physiology at the Temerty Faculty of Medicine. He’s also the inaugural James B. Bassingthwaighte Chair in Integrative Physiology.

Jesse Gillis is back at U of T 15 years after obtaining his PhD in physiology.

Prior to his return to U of T, Gillis held a faculty position at the renowned Cold Spring Harbor Laboratory on Long Island, NY, where he first established his computational biology lab 10 years ago. There he developed a portfolio of diverse projects which he will continue to pursue in his new lab in the Donnelly Centre, which specializes in large scale data acquisition and analysis.

“The methodological overlap with the Centre is fantastic,” he said. “AI is distributed across U of T, but really the combination of computational biology and using high-throughput data is unrivalled in the Donnelly.”

The Gillis lab seeks to understand how the information stored in the genome is used to build organisms. They use gene expression data from single cells, taken from various organs and species, to build maps of gene function that explain how differences arise.

“We use single-cell data to explain differences at the organismal level,” said Gillis. “For the most part, we’re using gene co-expression data to find sets of genes that are doing things together. Those sets of genes might define novel cell types, and those cell types might be changing or be similar between species to try to understand how traits evolve.”

A better understanding of how individual cells interpret their genomes will shed light on fundamental questions, such as how the different cell types arise during development. One of Gillis’ projects involves identifying all the cell types in the human brain through his involvement with the Brain Research through Advancing Innovative Neurotechnologies (BRAIN) Initiative. Funded by the National Institutes of Health in the U.S., it aims to produce a dynamic picture of the brain showing how individual cells and neural circuits interact in space and time.

“Through building up these cell atlases across healthy brains to serve as a reference, we’re now at a point where we can apply this knowledge to try to understand brain disorders and I look forward to establishing collaborations with the Centre for Addiction and Mental Health to take this research further,” said Gillis, who may finally be on the cusp of fulfilling this PhD dream of modeling psychiatric disorders.

As the sole cross-appointee between the Donnelly Centre and Physiology, Gillis wants to harness data analysis at multiple scales to expand collaboration between the institutions.

“Physiology is occupying a little bit more of that organism level biology, whereas the Donnelly historically has been focusing at the molecular level. And single cell data which is my very strong interest along with other investigators in the Donnelly helps link these two levels together,” he said.

“I think there’s real scope for a lot of productive interactions between the two and I hope to be a mechanism for that.”

Gillis says he is excited to be back in Toronto and working with the Medicine by Design community.

“The Bassingthwaighte Chair really did seem tailor made to my interests in its specific focus within integrative physiology,” says Gillis. “In even my first month, Medicine by Design colleagues have been proactive in discussing collaboration. I am confident it will be a major resource to draw on for interdisciplinary collegial interactions.”