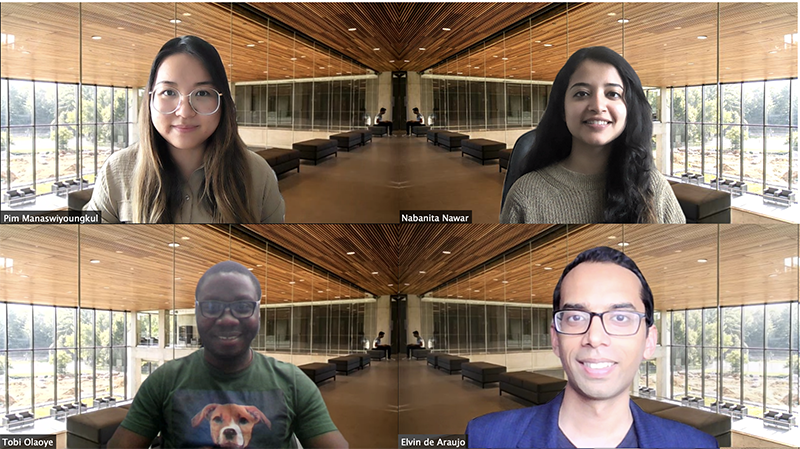 A person with healthy neurons and no neurodegenerative disease can conjure a happy memory in a second. But for half a million Canadians living with Alzheimer’s disease, which damages the neurons that need to communicate to make memories happen, it is an impossible task.

At Medicine by Design’s inaugural Building a Biotech Venture Pitch Competition, trainee-led team HDAX Therapeutics (HDAX) kicked off their pitch speaking about these devastating effects of Alzheimer’s disease. And thanks to this team’s effective storytelling, sound science and clear pathway to translation, HDAX was chosen by the judges to receive $25,000 in research funding.

HDAX — comprised of trainees from the lab of Patrick T. Gunning, who is a professor in the Department of Chemical & Physical Sciences at the University of Toronto Mississauga — is developing a small molecule technology that can interrupt the development of a particular Alzheimer’s disease-promoting protein. When the small molecule compound binds to the protein, it could potentially regenerate damaged neurons and reverse the damaging effects of Alzheimer’s disease.

“Unlike our competitors, what makes HDAX unique is that our candidate compounds bind one Alzheimer’s promoting protein alone and very strongly, which may offer an advantage from the perspective of drug safety,” says Tobi Olaoye, chemical biologist and PhD candidate in the Gunning lab who delivered the pitch for HDAX. “Drugs that bind multiple targets disrupt normal body functions and this leads to drug toxicity. Our preliminary findings have shown that our compound is able to reach the target site in the brain while minimizing off-target side effects. With the funding from Medicine by Design, we will be able to demonstrate that our compounds are safe and effective in vivo through advanced cognitive and behavioural mice studies.”

In addition to Olaoye and Gunning, the HDAX team includes Pimyupa Manaswiyoungkul, a bioassay specialist and project coordinator at the Gunning Lab; Elvin de Araujo, a structural biophysicist and research manager for the Centre for Medicinal Chemistry; and Nabanita Nawar a medicinal chemist and PhD candidate in the Gunning Lab. The HDAX team is in the process of forming their scientific advisory board and draws upon their collaborations with neurological specialists and clinicians.

“We held the pitch competition as part of our commitment to providing mentorship and seed funding to support the next generation of regenerative medicine entrepreneurs at U of T and its affiliated hospitals,” says Allison Brown who is the director of strategy & translation at Medicine by Design. “Medicine by Design funds world-class science — science that is largely carried out by faculty-supervised trainees across multiple institutions. The Building a Biotech Venture program and pitch competition was an opportunity to engage Medicine by Design trainees on how they might take the next step toward company creation, translating that cutting-edge research to have impact on human health.”

Mike Cooke, co-founder & CEO of AmacaThera, and one of the judges at the pitch competition, says all the pitches showed promising opportunities for company creation.

“All of the ideas pitched were a high caliber and it would be fantastic to see the teams continue to progress these technologies into the clinic,” says Cooke. “It’s exciting to see such great science combined with a plan to commercialize the technology for the benefit of patients.”

He adds, “The HDAX team showed us something that really was transformative and it’s going to be exciting to see how they progress towards the clinic.”

In addition to Cooke, the other judges included: Avi Goldfarb, chief data scientist at the Creative Destruction Lab, and the Rotman Chair in Artificial Intelligence and Healthcare, and a professor at the Rotman School of Management, U of T; Robin Quirk, director of technology sourcing and venture development at CCRM; Andrea Sampson, co-founder & executive speaker coach at Talk Boutique; and Emily Titus, vice-president, process sciences at Notch Therapeutics.

The competition was the culmination of Medicine by Design’s Building a Biotech Venture program, offered in partnership with the Health Innovation Hub (H2i), a campus-linked accelerator at the Temerty Faculty of Medicine at U of T. Over the past three months, the program has offered workshops and mentoring to help teams advance early-stage company concepts based on their regenerative medicine research.

More than 16 teams participated in the program and applied to the pitch competition. The final six teams were chosen based on the promise of their concept.

In addition to the support trainees were given in developing their venture concept, they also received coaching from Talk Boutique, a speaker representation and coaching company, to polish their virtual presentation skills including body language, vocal intonation, and storytelling.

For the HDAX team, the program was a beginning point for an ongoing partnership with Medicine by Design and others, Olaoye says.

“With the support of our advisors and accelerators, we believe we are on track to advancing our technology. Our team is fully committed, and Medicine by Design can play a significant role in our exciting journey.”