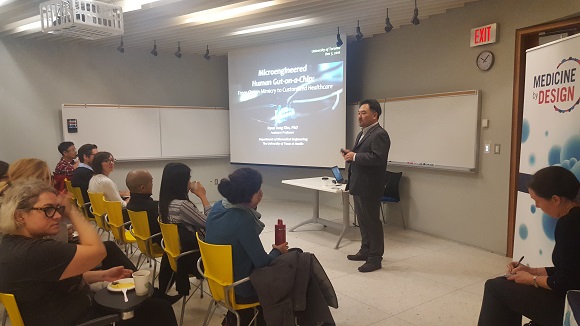 Hyun Jung Kim of the University of Texas at Austin delivers the first lecture in the Medicine by Design Speaker Series.

A thumb-sized silicone polymer chip that can mimic the complexity of the human gut may hold the key to understanding inflammatory bowel disease and offer better ways to test new drugs, a researcher from the University of Texas at Austin told more than 70 people at the inaugural Medicine by Design Speaker Series talk on Dec. 5.

Hyun Jung Kim, an assistant professor of biomedical engineering, said neither animal models nor tissue cultures can adequately replicate the intricate interactions between the gut cells, immune system, bacteria and mechanical forces that exist in human intestines. “It is very difficult to mimic the human physiology,” he said.

But by placing human cells and bacteria on a chip and using microfluidic technology to apply forces similar to peristalsis, Kim has grown a “mini-gut” that more accurately reflects the conditions in human intestines, including the villi — finger-like structures that aid the absorption of nutrients.

This “gut-on-a-chip,” which can be grown in days compared with the three weeks required for traditional cultures, has the potential to give researchers new insights into factors that contribute to intestinal health and disease. Kim said it also can also be used to determine the effectiveness and safe dosage levels of new drug therapies, and can potentially be connected to other “organs-on-a-chip” to study how different organs interact with each other.

Down the road, Kim said, the technology could even be used to personalize cancer treatments by taking a patient’s cells, recreating their gut on a chip and testing which therapies work best, based on their unique genetic profile.

“The Medicine by Design Speaker Series brings established and emerging leaders in regenerative medicine, like Dr. Kim, to Toronto to share their work and exchange ideas,” said Peter Zandstra, executive director of Medicine by Design. “Over time, we look forward to building it into a pre-eminent global forum that will advance the frontiers of stem cell therapies and make Canada a destination for the very best researchers in the world.”

Find out about more Medicine by Design events.