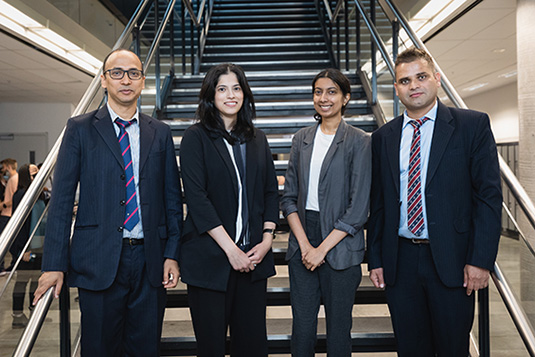 After people with colorectal cancer are treated, a high percentage of them will relapse.

That’s a fact that trainee-led team DTPX Therapeutics would like to change—and thanks to a winning pitch at the Building a Biotech Venture Pitch Competition on May 30, they may be on their way to doing so.

“When we see the tumor receding, we celebrate. But what we found is happening, is that there is a population of cells that enter a hibernation state, which allows [the cells] to tolerate therapy. So, when the treatment stops, these cells regrow, causing tumor relapse,” said Sumaiyah Rehman, who delivered the pitch for DTPX Therapeutics.

The team is comprised of trainees —a group that can include post-graduate students, post-doctoral fellows and research or scientific associates — from the labs of Catherine O’Brien, Thomas Kislinger and Philip Kim.

O’Brien is a senior scientist at the Princess Margaret Cancer Centre, a surgeon at the University Health Network (UHN), and an associate professor in the Department of Surgery at the University of Toronto (U of T). Kislinger is a senior scientist at Princess Margaret Cancer Centre and a professor of medical biophysics at U of T. Kim is a professor at the Donnelly Centre for Cellular and Biomolecular Research, U of T.

In their pitch, DTPX Therapeutics proposed a cell-based therapy that can target these hibernating cells, lessening the chance that the tumor will regrow. This product could apply to many types of cancers.

Thanks to their effective storytelling, a solid product concept and a clear pathway to translation, DTPX Therapeutics was chosen by the judges to receive $25,000 in research funding, as the first-place team.

The second-place team, Azane Therapeutics will receive $10,000 to continue to develop their product concept, which is a delivery vehicle for mRNA-based therapies. 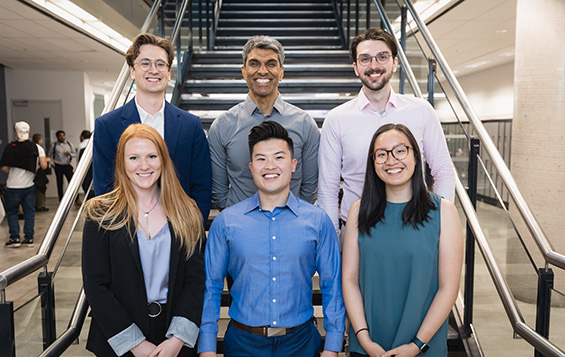 In a genetic disease called “ornithine transcarbamylase deficiency” (OTCD), ammonia builds up in the blood as the result of a protein that is missing in cells in the liver, which causes physical and cognitive symptoms. Current treatments for OTCD only limit symptoms, but Azane Therapeutics propose a method for treating the underlying cause of the disease, the missing protein, with mRNA.

The team is composed of trainees from Omar F. Khan’s lab. Khan is an assistant professor at the Institute of Biomedical Engineering and Department of Immunology, U of T.

“To get mRNA into a cell, we use a delivery system called a lipid nanoparticle, which is a tiny ball of fat that carries mRNA into diseased cells like a little delivery package, where it can regenerate the missing protein and prevent the buildup of ammonia,” said Grayson Tilstra in the pitch for Azane Therapeutics.

But lipid nanotechnology is not perfect, and this is where Azane Therapeutics say their product offers an advantage. They propose a delivery system that’s less toxic and more efficient at getting the mRNA into the cell.

The pitch competition, which was open to the public and attracted more than 100 registrants, highlighted six teams in total who made pitches on a range of products. They were evaluated by a panel of judges, who selected the top teams.

The expert judges were Alberto Galasso, professor of strategic management at the Rotman School of Management at U of T; Ella Korets-Smith, chief business officer at Virica Biotech; Angela McDonald, entrepreneur-in-residence, Versant Ventures; and Robin Quirk, who is vice president, technology sourcing & venture development at CCRM.

“It was a difficult decision to make. The quality of all the pitches was so high,” said Quirk. “The top teams we chose were, we thought, closest to generating some real commercial traction that will ultimately benefit patients. But we hope that all the teams will continue to progress their ventures. I think we’ll be hearing more from these next-generation entrepreneurs in the future.”

All the teams who participated spent six months learning in-depth aspects of venture creation from building a business case to intellectual property and regulatory issues to communicating effectively to investors. They were part of the Building a Biotech Venture program, a partnership between Medicine by Design, an initiative that drives regenerative medicine research at U of T and its affiliated hospitals toward clinical impact; the Precision Medicine Initiative (PRiME), a U of T initiative that aligns research efforts in the area of precision medicine; the Health Innovation Hub (H2i), a campus-linked accelerator at U of T’s Temerty Faculty of Medicine; and Talk Boutique, a full-service speaker representation and coaching company. 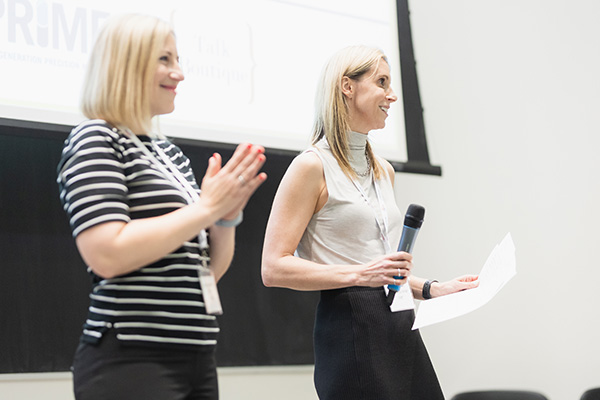 Milica Vukmirovic (left), from the Precision Medicine Research Initiative (PRiME) at U of T and Allison Brown (right), from Medicine by Design at U of T, announce the top teams at the Building a Biotech Venture Pitch Competition. (Photo by Neil Ta.)

Allison Brown, director of strategy & translation at Medicine by Design says the program, now in its second year, is part of Medicine by Design’s commitment to providing mentorship and seed funding to support the next generation of regenerative medicine entrepreneurs at U of T and its affiliated hospitals.

“Toronto is a hub for world-class scientists in regenerative and precision medicine, and trainees are on the forefront of that science,” said Brown. “The Building a Biotech Venture program and pitch competition was an opportunity to engage trainees on how they might take the next step toward company creation to translate that cutting-edge research to have impact on human health.”

Brown adds that one of the main goals of Building a Biotech Venture is to prepare the teams to be successful in programs like the Creative Destruction Lab (CDL), a Medicine by Design partner, and to be ready to participate in CDL’s Health Stream, which will connect them with investors and venture funding opportunities.

“Two teams who participated in the 2021 program have entered CDL, including last year’s pitch competition’s top team, HDAX Therapeutics,” said Brown. “And, because of the start they got through the Building a Biotech Venture program, several teams from last year’s program have also continued to develop their ventures, working towards creating companies that will have a positive impact on human health.”

The Building a Biotech Venture program will return for a third year in 2023, starting with an information session in late 2022. Sign up for the Medicine by Design mailing list to receive regular news and event updates from Medicine by Design.