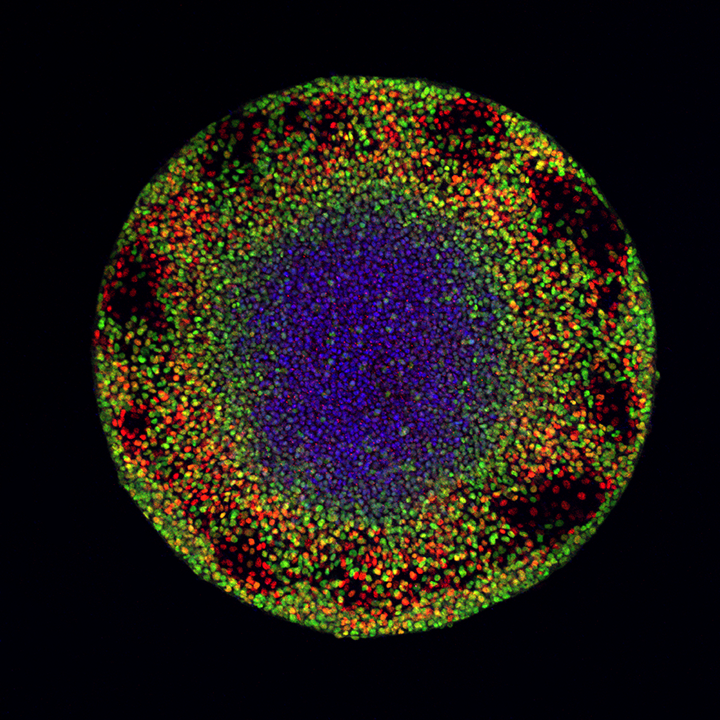 A U of T research team has developed an engineered platform that uses human pluripotent stem cells to mimic the initiation of a human embryonic developmental stage called gastrulation. (Photo by Mukul Tewary)

Medicine by Design-funded researchers have engineered a new platform to study the earliest stages of human development in the lab, pulling back the curtain on key biological processes that until now have taken place inside the uterus, beyond the gaze of scientists.

Believed to be the first of its kind in Canada, the technology enables human embryonic stem cells to self-organize into a structure with embryo-like features, including the early precursors of organs such as the brain, the heart and the liver.

Researchers seeking to treat diseases by harnessing the human body’s capacity for self-renewal have long sought to understand these processes because they believe they hold insights that could be critical to advancing new regenerative medicine therapies. But technical hurdles, ethical concerns and legal restrictions have prevented them from studying these crucial developmental stages in human embryos in the lab. That’s why researchers are turning to stem cell bioengineering for answers.

“Since it’s an artificial, engineered environment that can mimic some of the fundamental organizing principles that we think are important for human embryo development, our platform has the potential to alleviate some of the challenges associated with studying human embryos in the lab and provide very useful hints as to how the initial stages of human development start,” said Mukul Tewary, a PhD candidate at the University of Toronto’s Institute of Biomaterials & Biomedical Engineering (IBBME). He is the lead author of a paper describing the platform that will appear in November in a special issue of Development and has been pre-published on the journal’s website.

“Knowing this can not only give us insights from a basic biology point of view as to how we come to be, but also provide key information that can be very valuable in the field of regenerative medicine as a whole.” 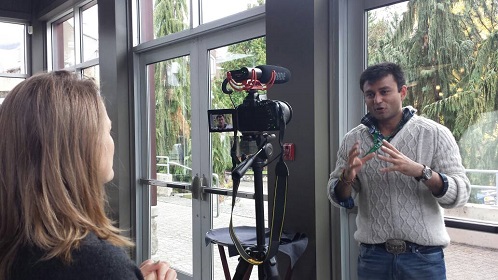 Mukul Tewary (right) discusses his research at the 2016 Till & McCulloch Meetings. Tewary, a PhD candidate at U of T’s Institute of Biomaterials & Biomedical Engineering, is the lead author of a paper that will appear next month in a special issue of Development. (Photo provided by the Ontario Institute for Regenerative Medicine)

While a few studies in the U.S. have previously demonstrated “synthetic” embryo patterning, including a gastrulation-like patterning platform developed by researchers at Rockefeller University, Tewary’s platform advances the technology in important ways that he thinks will enable researchers to start to test assumptions they have made about early human developmental biology based on animal studies and mathematical modelling. Ultimately, researchers hope this information could bring them closer to a long-standing goal of regenerative medicine: using stem cells to grow new tissues and organs in the lab to replace those that have been damaged by disease.

But scientists, ethicists and policy makers will have to navigate the thorny questions these new platforms are raising. “Up until recently, this wasn’t something bioethicists had even considered,” Tewary said.

Human embryo-like structures have no potential to develop into human beings because they arise from a sheet of human embryonic stem cells, rather than from an egg that has been fertilized by a sperm. Nonetheless, their advent challenges our definition of what an embryo is.

Until recently, it was not technically possible for researchers to keep human embryos alive in a dish beyond the point at which they would normally implant in the uterus — roughly seven days after fertilization. Even if they could remain viable past this point, a decades-old international legal and regulatory consensus, enshrined in Canada in the Assisted Human Reproduction Act, prohibits scientists from growing intact human embryos in the lab beyond 14 days. That’s when the embryo starts to self-organize along a head-to-tail axis known as the primitive streak, and just before gastrulation, when the single-layered disk of cells called the epiblast forms three distinct layers that eventually become different types of organs. Bioethicists and scientists settled on the 14-day threshold because they wanted to stop the growth of lab-grown embryos before the precursors to brain cells could even start to form, sidestepping debates about when consciousness and the capacity to feel pain begin.

Recent advances are allowing scientists to culture human embryos in a dish for longer periods of time, just short of 14 days. This development, along with the creation of engineered platforms that give rise to stem cell-derived, embryo-like structures, have “put human developmental biology on a collision course with the ‘14-day rule’,” a commentary last year in Nature warned. Or, as a recent headline in the MIT Review of Technology put it, “Artificial human embryos are coming, and no one knows how to handle them.”

Scientists aren’t there yet but advances are happening quickly. Over the past three years, several research teams have modelled early embryonic development in the lab by placing human embryonic stem cells on micro-patterned surfaces, which allow them to control where and how the cells stick. They then used different media to induce growth and differentiation.

The platform developed by Tewary and colleagues in the labs of University Professor Peter Zandstra and IBBME Associate Professor Rodrigo Fernandez-Gonzalez improves on that work in two ways. The research team used ultraviolet light lithography to transfer micro-patterns on to a polymer-covered plate, increasing the efficiency and robustness of the patterning process compared with other techniques. And unlike other platforms, theirs is high-throughput, enabling them to create many thousands of embryo-like structures and test their responses to a variety of different conditions in each experiment. Both innovations have allowed them to identify with greater precision the signals and cues driving early development in human embryos. Tewary is now examining how other developmental events, such as neural patterning, can be coaxed out of the system. They could provide insights into gastrulation, which happens around 14 days after fertilization, raising questions about how to balance ethical and legal considerations with discoveries that could fundamentally transform science and medicine.

As these engineered platforms become more sophisticated, researchers and bioethicists have raised concerns that current rules around embryo research may be inadequate for what could lie ahead, especially if embryo-like structures derived from stem cells start to display characteristics that emerge in human embryos well after the first 14 days of development.

Some are calling for broad international discussion about whether the 14-day rule should be revisited. Last year, the International Society for Stem Cell Research updated its guidelines on stem cell research to “recognize that the development of increasingly complex in vitro models of early stages of human development should undergo specialized review.”

Others argue that simply tweaking the 14-day rule may not be enough. Earlier this year, researchers at Harvard Medical School and the University of Groningen argued that trying to pre-empt the emergence of “morally concerning features” based on developmental milestones such as the primitive streak will not adequately address embryo-like structures that may skip steps or develop along different timelines. They suggested, instead, that ethical limits should “be based as directly as possible on the generation of such features,” with researchers and bioethicists working together to develop the rules.

But even once a consensus is reached, any changes could be years in the making given the international patchwork of laws and scientific guidelines that govern embryo research. 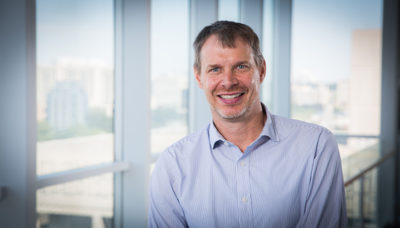 “As a bioengineer, there is not much more you can ask for from a project,” said University Professor Peter Zandstra. (Photo by James Poremba)

Zandstra, Tewary’s supervisor, said he is excited about the new avenues for answering fundamental biological questions and making organ-like structures this platform opens, as well as the opportunities it raises for broader discussion.

“It catalyzes interesting and important legal, social and ethical conversations that are crucial for Canada to face and lead in,” said Zandstra, who holds the Canada Research Chair in Stem Cell Bioengineering and is also director of the Michael Smith Laboratories and the School of Biomedical Engineering at the University of British Columbia. “As a bioengineer, there is not much more you can ask for from a project.”

The special issue of Development celebrating the 100th anniversary of the publication of D’Arcy Thompson’s On Growth and Form, a seminal book on the application of mathematics to biology, will be published on Nov. 28, 2017.

This research was funded by Medicine by Design and the Canadian Institutes of Health Research.