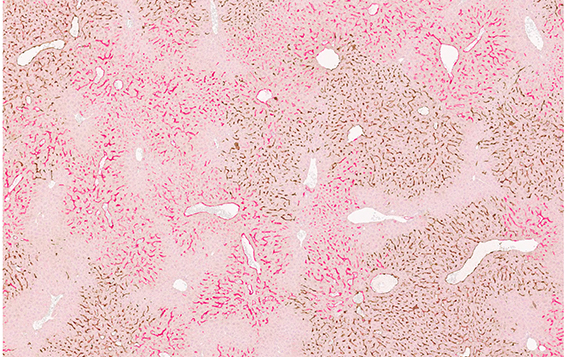 In this new publication, researchers transplanted cells (brown and pink stained regions), which they found were able to engraft and allow blood to clot, correcting hemophilia A in animals. (Image provided by Blair Gage).

With a new research publication from the lab of Gordon Keller, senior scientist and director of the McEwen Stem Cell Institute at the University Health Network (UHN), researchers are one step closer to a viable cell therapy for liver diseases including hemophilia A.

In 2020, the Keller lab published work that showed functional endothelial cells of the liver, called liver sinusoidal endothelial cells (LSECs), could be developed. Among their many functions, LSECs are one of the main sources of a blood-clotting protein called factor VIII.

In people with hemophilia A, factor VIII is missing or defective, such that the blood does not clot effectively. This can lead to internal bleeding, which can cause chronic pain and joint disease, and often requires continuous factor VIII infusions to reduce the chance of more serious complications including death.

The new Medicine by Design-supported research, published in Cell Reports, builds on the findings from the earlier study to show that LSECs made from pluripotent stem cells hold the potential to treat diseases like hemophilia A.

Beginning with pluripotent stem cells, which are cells that have the potential to turn into any other cell type in the human body, the researchers developed a multi-step process to guide them into becoming endothelial cells and then LSECs. 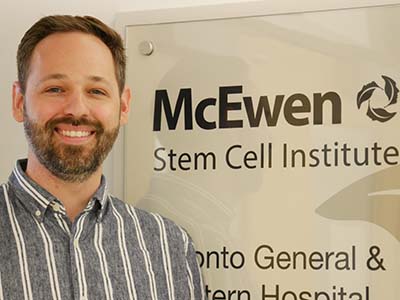 Blair Gage, post-doctoral fellow in the Keller lab and lead author of the study.

“Once we had endothelial cells, we wanted to put them to work,” says Blair Gage, post-doctoral fellow in the Keller lab and lead author of the study. “We wanted to see if these cells could mature into LSECs efficiently and make enough factor VIII to improve blood clotting following transplantation into an animal with hemophilia A. The experiment worked exceptionally well as the cells did engraft and secrete sufficient factor VIII allowing blood to clot and correcting the disease in the animals.”

This study was the result of an international partnership between Keller’s lab and researchers located in Northern Italy. The UHN researchers worked with the lab of Antonia Follenzi at the University of Piemonte Orientale in Novara, Italy, experts in animal models and therapeutics for hemophilia A.

Gage says the endothelial cells from the Keller lab in Toronto were shipped to Italy and transplanted into mice with Hemophilia A.

Long term, Gage says he sees the potential to have a viable regenerative medicine vascular therapy for the liver, not just for hemophilia A but for other liver diseases as well. A person could receive new endothelial cells that would function the way they are supposed to, addressing the problem at the cellular level. 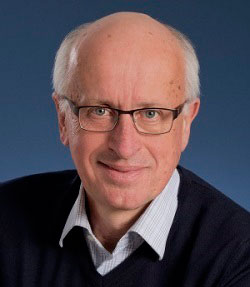 Keller’s lab leads a large Medicine by Design team that focuses on developing new cell- and tissue-based therapies to treat different forms of liver disease. The team includes eight labs from across the University of Toronto (U of T), UHN and The Hospital for Sick Children that work in a cross-section of disciplines including computational biology, biomedical engineering and stem cell biology.

Keller, who is also a professor at U of T’s Department of Medical Biophysics, says this work is possible because of the convergence of labs and disciplines on the Medicine by Design team that he leads.

“Medicine by Design has been a catalyst for collaborative efforts in the regenerative medicine community in Toronto and has allowed us to bring together a team that had never really worked together.”

Gage says that the positive results of this research are a crucial step to further refining endothelial cell therapies for the liver.

“Establishing that these cells can function correctly and produce factor VIII is important,” says Gage. “Of course, there are hurdles to overcome, such as immune rejection, which is a challenge for many cell therapies. But this study gives us a foothold and motivates us to keep working toward effective cell therapies for people who live with different types of liver disease.”