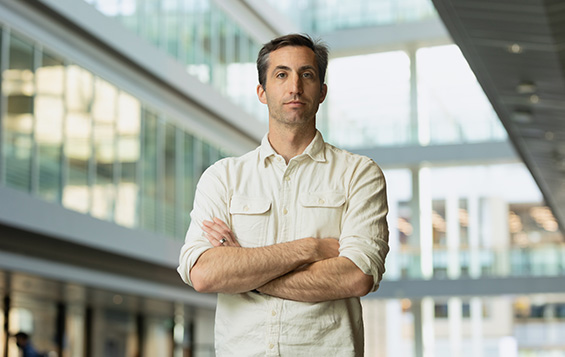 Matthew Buechler, assistant professor in the Department of Immunology at the University of Toronto, started his lab last year.

Matthew Buechler, a researcher with expertise in immunology, is the latest New Investigator to join the Medicine by Design community.

Buechler, who is one of 17 faculty members at the University of Toronto (U of T) whose recruitment was supported by Medicine by Design, recently joined the Temerty Faculty of Medicine as an assistant professor in the Department of Immunology.

“After meeting the amazing faculty members and stellar trainees, I just had the gut feeling that U of T was the right place to build a cutting-edge research program focused on the foundational science needed to create precision medicines for fibrosis and cancer,” says Buechler, who moved from the U.S. to Toronto last year to start his lab at U of T.

Over the course of his education and post-doctoral work Buechler studied HIV vaccine development, the influence of inflammation on the development of the innate immune system, and immune cell interactions. Buechler says his lab now focuses on studying fibroblasts and macrophages, and how targeting those cell types may be important across many disease indications.

His decision to come Toronto was also influenced by the community of people he would have the opportunity to collaborate with, he says.

“My time at Genentech taught me that truly transformative science requires a strong team of investigators with expertise across different fields of science,” says Buechler. “Medicine by Design will enable the cross-discipline expertise needed to make key discoveries and develop new therapeutics.”

In addition to Buechler, the investigators who have had their recruitment supported by the program come from diverse specialties like cell biology, biomedical engineering, molecular genetics and neuroscience. They are in faculties across the university and at hospitals such as The Hospital for Sick Children, Sunnybrook Research Institute and the Princess Margaret Cancer Centre and other University Health Network hospitals.