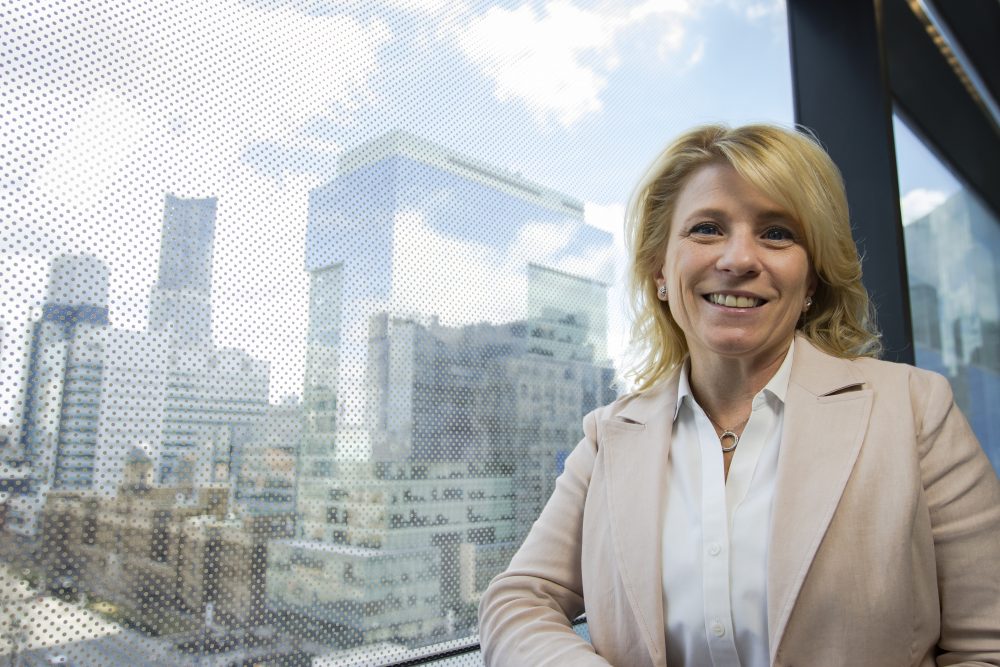 Shana Kelley, University Professor, Departments of Pharmaceutical Sciences, Chemistry and Biochemistry and the Institute of Biomedical Engineering, University of Toronto, leads a research team that’s working toward producing mature stem cells at scale to be used as therapies for many diseases.

Stem cells have long held the potential to transform treatments for a range of diseases.

This promise comes from the fact the stem cells are immature cells that can turn into any type of cell in the human body — for example, a liver cell or a cardiac cell — in a process called differentiation.

In the body, it’s a very efficient process. But to use stem cells to create cell-based therapies on a large scale, researchers need to make the process just as efficient in the lab. That’s the goal of a Medicine by Design-funded research team led by Shana Kelley.

“We’re trying to understand the bottlenecks,” says Kelley, who is a University Professor in the departments of Pharmaceutical Sciences, Chemistry and Biochemistry and the Institute of Biomedical Engineering at the University of Toronto (U of T). “When large batches of cells are differentiating, individual cells tend to get stuck at particular points. So we are engineering proteins and antibodies and then testing them to see if we can help stem cells can get past these bottlenecks. We’re essentially trying to guide the cell through differentiation in a very precise way.”

Eventually, Kelley sees the impact of the work as being able produce mature cells at scale, which would have therapeutic uses. For example, being able to scale hematopoietic, or blood-forming, stem cells could be a powerful treatment for different types of blood disorders. There’s also the potential for the cells that are generated in vitro (in the lab) to be used in vivo (in the body) to promote self-repair, which could contribute to intestinal regeneration or blood-brain barrier repair.

“The individuals most in need of this type of repair are people who are aging. The ability to control degenerative diseases would have tremendous economic, societal and health implications. That really motivates us,” Kelley says.

Kelley leads a research team that involves seven labs, more than 50 people, and two distinct aims. In one of the major aims of the project, Kelley is collaborating with Jason Moffat and Benjamin Blencowe, both professors at the Donnelly Centre for Cellular and Biomolecular Research, to find all human genes that play a role in the differentiation process using the gene-editing tool CRISPR.

In the other major aim of the project, Stephane Angers, a professor and associate dean of research at the Leslie Dan Faculty of Pharmacy, and Sachdev Sidhu, a professor at the Donnelly Centre, are developing antibody molecules that could be used to activate and guide cell differentiation, while Keith Pardee, an assistant professor at Pharmacy, is developing synthetic biology approaches for the cost-effective synthesis of these antibodies into potential therapeutics. Alison McGuigan, a professor at the Department of Chemical Engineering & Applied Chemistry, is also on the team and is investigating molecular pathways acting on the tissue.

The multi-disciplinary team is one of 11 sharing nearly $21 million in funding from Medicine by Design over three years. Funded by a $114-million grant from the Canada First Research Excellence Fund, Medicine by Design is a strategic research initiative that is working at the convergence of engineering, medicine and science to catalyze transformative discoveries in regenerative medicine and accelerate them toward clinical impact.

Kelley says the scientific diversity of her team increases the potential of the research, “We’ve pulled together engineers, chemists, developmental biologists and genomics experts. All of these different fields converging makes the research very different than if you just had a bunch of stem cell biologists sitting in a room together. Having people with different types of expertise leads to fresh ideas and a different type of conversation.”

The team’s work is already having an impact. One of the synthetic factors the team has developed, an antibody that is able to trigger signal transduction in a cell, has been licensed to a company called AntlerA, which has begun preclinical testing. Signal transduction is the process by which a cell receives a signal from outside the cell that leads to a functional change within the cell, and it is a major factor in cell differentiation.

Kelley adds that she could see clinical testing efforts from this project happening within the next two to three years. “This research is very cross-cutting, and I think that means there could be more impact more quickly. For example, I’ve talked to Medicine by Design researchers on the cardiac side who see the utility of our project for their own research. Because our work is general, it’s definitely applicable to different areas of regenerative medicine.”

With her applied chemistry background and focus on technology development, Kelley brings an important perspective to the Medicine by Design community.

“My work in chemistry was focused on new technologies for measuring molecular analytes. I was brought into Medicine by Design because of my work building platforms so that we could better measure what’s going on with the cell. We can only see and study the biology that we can measure. My work brings the technological side alongside the stem cell biology.”

Kelley adds, “I think Medicine by Design is such a powerful effort in so many different ways. It has pulled so many people like me into the regenerative medicine field by having the resources there to support the research. It has been transformative for my own research. It has completely changed what we do and how we do it, in a very good way.”