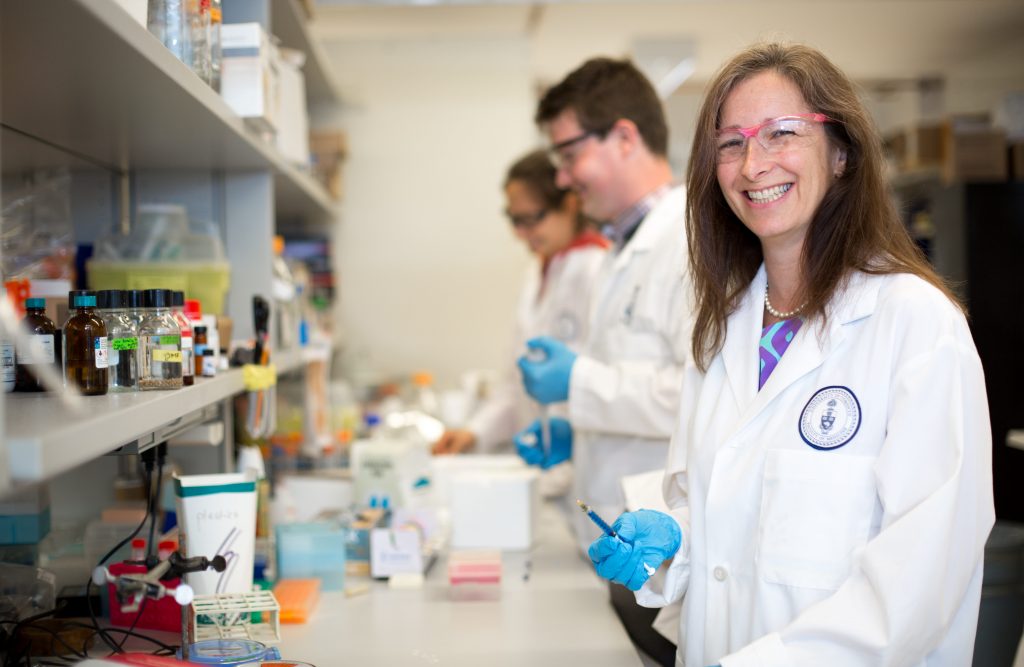 Molly Shoichet leads a multidisciplinary Medicine by Design team that is seeking to reverse a common form of blindness using stem cells. (Photo by Roberta Baker) 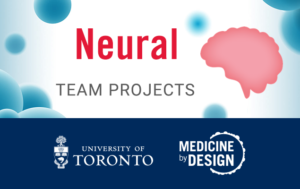 Robert Devenyi made headlines three years ago when he became the first physician in Canada to implant the bionic eye, a retinal chip hooked to a wearable camera that partially restored vision in a patient who was virtually blind.

Now Devenyi, ophthalmologist-in-chief at University Health Network, is part of a Medicine by Design-funded team project led by University of Toronto tissue engineer Molly Shoichet that could one day make the device obsolete by harnessing stem cell-based therapies to reverse a common form of blindness.

“If people like Molly develop ways to repopulate the retina with functioning cells, then we won’t need things like the bionic eye,” says Devenyi, who is also team ophthalmologist for the Toronto Maple Leafs. “One day, hopefully, we’ll look back on the bionic eye as this crazy, outlandish idea.”

The research brings Shoichet and Devenyi together with colleagues from across U of T and its affiliated hospitals who work in diverse fields such as life sciences, computational biology and engineering. It is one of 20 collaborative team projects Medicine by Design is funding to accelerate discoveries in regenerative medicine and move them from the lab to patients more quickly.

Read more about this and two other Medicine by Design-funded team projects that are unlocking the power of stem cells to better understand and treat neurological diseases.

Shoichet’s team is trying to harness stem cells to reverse vision loss caused by age-related macular degeneration. The disease, which affects 1.4 million Canadians and is the most common cause of blindness in the developed world, occurs when photoreceptors — cells in the retina that perceive light — start to break down.

Injecting drugs into the eye can slow down some forms of the disease, but there is no cure. Shoichet’s team hopes that replacing the decaying photoreceptors with healthy ones made from stem cells, could one day reverse macular degeneration and other forms of blindness and restore normal sight.

“People like Dr. Devenyi would ultimately take the discovery all the way to the patient,” says Shoichet, a University Professor in the Department of Chemical Engineering & Applied Chemistry and the Institute of Biomedical Engineering. “But there’s a lot of work we need to do before then, and what’s great about our team is that everyone has an important role in meeting these big challenges that we are trying to overcome.”

Coveted for their ability to turn into any cell type in the body, stem cells hold great promise for rebuilding tissues and organs that are damaged by disease, injury and aging. However, turning research discoveries into treatments faces many challenges.

For a start, researchers must ensure they are making the right type of cells to replace those that have been damaged.

Through cell transplants, U of T researchers have already been able to restore some sensitivity to light in blind mice. Before the procedure the mice did not react when a flashlight was shone in their eyes, but after the cells were transplanted their pupils became smaller in response to light.

These early grafts were made from stem cell-derived rod photoreceptors, cells in charge of peripheral vision that help us see in the dark. But to restore sight fully, the cones — the photoreceptor cells that are responsible for colour and central vision — need to be replaced, and they are far trickier to make. That’s where the diverse expertise of Shoichet’s collaborators comes in.

Coaxing stem cells to become rods, cones or any other cell type is not unlike cooking, with different ingredients added to the cells at just the right time. By tweaking these molecular concoctions, the molecular geneticists on the team, Derek van der Kooy of U of T’s Department of Molecular Genetics and Valerie Wallace, senior scientist at the University Health Network, have cleared a long-standing hurdle and turned stem cells into cones. But the recipe isn’t perfect. While the team has discovered a small molecule that results in mostly cone photoreceptors, there are still some other cells that need to be cleared away before transplantation.

Enter Shana Kelley, a professor at the Leslie Dan Faculty of Pharmacy, and Ted Sargent, a University Professor in the Department of Electrical & Computer Engineering. They are developing a new technology based on tiny magnets that will allow them to selectively separate the cones from the other cells.

“We are panning for gold here and we want pure gold at the end,” Shoichet says. “The cone photoreceptors are so hard to make and we want to make sure we get all of them.”

To ensure the stem cell-derived cones are like the ones found in the eye, a team of computational biologists led by Gary Bader at U of T’s Donnelly Centre for Cellular and Biomolecular Research will run the cells’ detailed molecular profiles through a computational algorithm for a side-by-side comparison.

But even if the cones make it to this point, they still face the ultimate challenge: surviving in the body after the transplant. Most of the time, transplants fail because cell grafts struggle to adapt to the new environment and die. That’s why Shoichet’s lab is working on a new way to deliver the cells.

The key to transplant success could be a biomaterial that protects the cells during transplantation. Shoichet’s lab is designing next-generation hydrogels — polymers that behave as both a liquid and a gel — to promote cell survival and integration after transplantation, increasing the likelihood that the transplant will take.

“The great think about the hydrogel is that we can control its stiffness,” says Nikolaos Mitrousis, a PhD student in Shoichet’s lab. “The one we use for transplants is softer and disappears about a week after transplantation.” The lab is also developing other kinds of hydrogels to deliver drugs and control the timing of their release in the body.

Shoichet is optimistic about the advances the interdisciplinary team is making. “It is an exciting time. We are encouraged by our results and, while there are many hurdles to get to the clinic, we are driven every day to succeed,” she says. 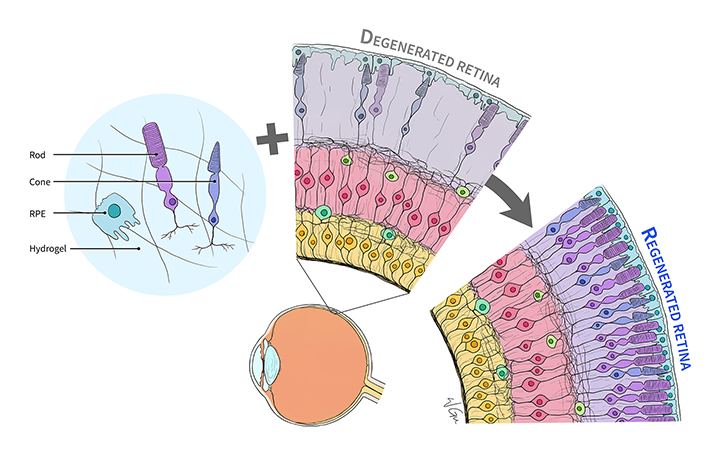 Restoring sight through cell transplants: In age-related macular degeneration, retinal pigmented epithelium (RPE) cells that nourish the photoreceptors wither away, prompting a disappearance of rods and cones and eventually loss of vision. Researchers hope they can regenerate the retina by replacing the missing cells with stem cell-derived grafts encased in hydrogel that boosts transplant success. (Illustration by Wendy Gu)

Learn about another Medicine by Design-funded project that is testing new ways to treat blindness. 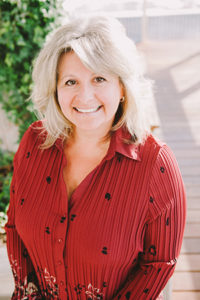 Strokes kill neurons and other cells in the brain, often leaving survivors with devastating consequences such as impaired movement, speech and memory. A growing body of research in animal models suggests transplanting new cells into the brain could help repair this damage, but no one knows exactly how.

That’s the question Cindi Morshead and her collaborators are tackling thanks to a Medicine by Design team project award.

“The transplanted cells could be making new neurons and other cells, or they could just act like growth factor factories, releasing chemicals that cause the rest of the brain to become more plastic and repair itself,” says Morshead, a professor in the Division of Anatomy in the Faculty of Medicine’s Department of Surgery. “Or it could be a combination of both.”

To test these possibilities, Morshead has teamed up with Andras Nagy, senior scientist at the Lunenfeld-Tanenbaum Research Institute at Sinai Health System, to create cells fitted with a “suicide gene” that can be turned on with a drug, and with Shoichet to find the best way to transplant these cells. By wiping out the transplanted cells after the animals have recovered from stroke, they’ll be able to tell if the graft provided raw materials for rebuilding the brain or chemicals that helped the injured brain repair itself. 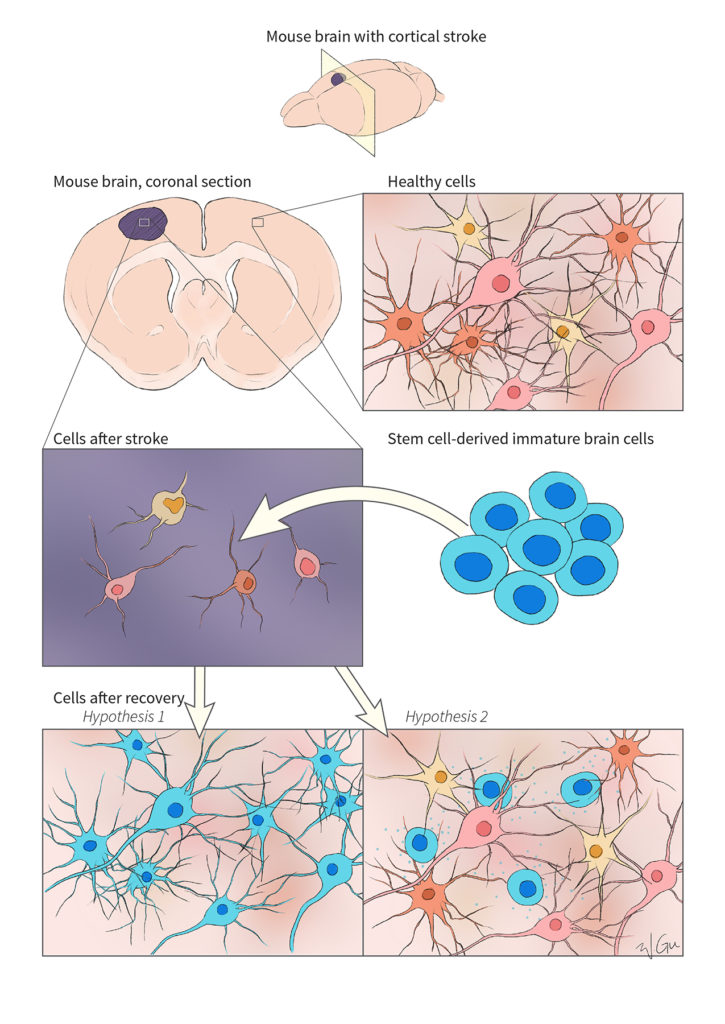 If stroke symptoms recur after the cells are eliminated, it would suggest that transplanted cells are there for the long haul, probably to make neurons and other cells needed to fill the void left by stroke.

If, on the other hand, stroke symptoms do not return, this would mean transplanted cells were needed for only a short period of time to release chemicals that spark the brain’s ability to heal on its own. If this turns out to be the case, it raises the possibility that stroke damage could be reversed with drug injections, rather than more invasive cell transplants.

Although research is still in early phase, Morshead is also working with Nir Lipsman, neurosurgeon at Sunnybrook Health Sciences Centre, who will help bring treatment to patients when it is ready.

James Ellis wants to know how stem cells give rise to different types of neurons, cells that make up most the brain and transmit information through it.

Ellis, a senior scientist at SickKids and a professor at U of T’s Department of Molecular Genetics, is at the helm of a Medicine by Design team that aims to uncover the basic biology behind brain development and how it can go wrong in disease. These insights could help boost large-scale production of neurons for future therapies. 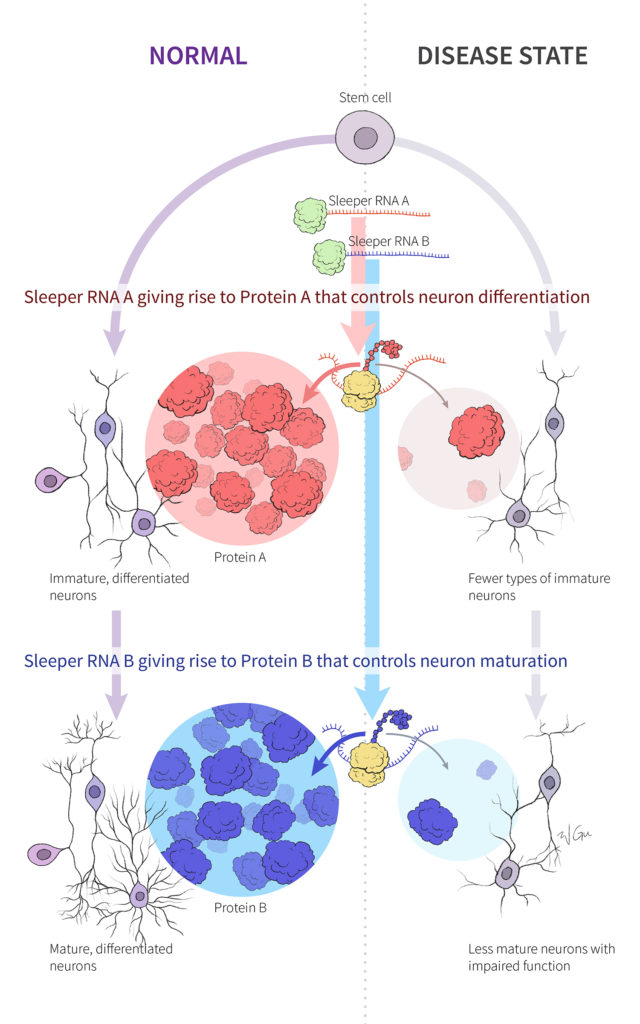 The timing of protein emergence is important for neuron development. During brain development, the brain stem cells differentiate and mature into fully formed neurons. For this to happen, different sleeper RNAs must give rise to protein at just the right time. If this process is delayed, the ensuing low protein levels can lead to a disease state where neurons remain underdeveloped, as is the case in Rett syndrome. (Illustration by Wendy Gu)

To shed light on the molecular roots of brain disorders, it helps if you can simulate the disease in a dish by studying neurons that are affected by it. But first, scientists must learn how to grow different kinds of neurons.

To that end, Ellis is investigating molecular events that drive stem cells to become various neurons in the cortex, the outer layer of the mammalian brain that controls cognitive function. Building largely on previous work done by Freda Miller at SickKids and on studies with Ben Blencowe and Quaid Morris, both of the Department of Molecular Genetics and the Donnelly Centre for Cellular and Biomolecular Research, and John Calarco, of U of T’s Department of Cell and Systems Biology, Ellis thinks that the key to making the right sort of neuron may be pinpointing when certain proteins are made in the cell.

Encoded by the genes, proteins make up our cells and do most of the work in them. When a gene is switched on, its sequence is copied into an intermediary RNA molecule that serves as a blueprint for proteins. But the RNAs don’t always go at once to make a protein, as previously thought. Instead they can lie dormant for days, or weeks even, like sleeper agents waiting to be activated, so that a protein is made precisely when needed.

In the brain, this delay between a gene being turned on and its protein being made ensures that a correct type of neuron is born at the right time and place during development. If a sleeper RNA lies low for too long, the absence of its protein can sprout the wrong kinds of neurons or affect their development. For example the gene that leads to Rett syndrome, a type of autism, makes sleeper RNA as Ellis’ team discovered recently. The finding now allows them to search for ways to dial up the missing protein’s levels in the hope of finding treatment.

“If we can find proteins that are too scarce, or too abundant, in neurological disorders, then we could test for drugs that correct protein levels in cells,” Ellis said. “And if that drug corrected the types of neurons being made or their activity, then this could potentially lead to treatment.”